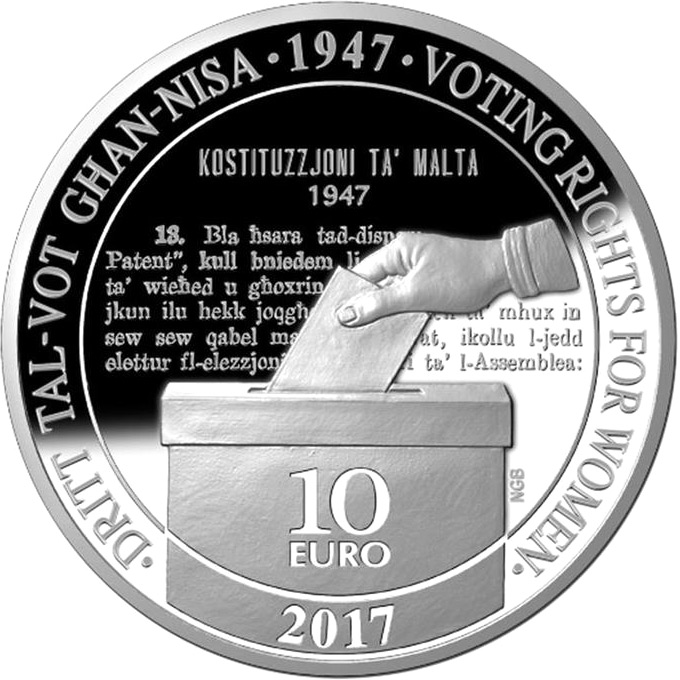 In 2017, the Central Bank of Malta issued a silver coin to mark the 70th anniversary of the coming into force of the 1947 constitution, which enshrined the principle of universal suffrage to all persons over 21 years of age. This was the first time that Maltese women were given the right to vote - a right which was exercised for the first time on 25-27 October 1947. The coin's obverse carries the emblem of Malta and the year of issue 2017. The reverse of the coin depicts a hand casting a vote in a ballot box. In the background is reproduced the text of the 1947 Constitution specifying that all persons over 21 years of age were eligible to vote. The granting of the right to vote to women as well as the right to stand for public office was hotly contested. Evidence of this is the fact that the National Assembly set up to draw up a draft constitution began its work on 20 January 1945 without any women representatives. Two months later the Women of Malta Association was finally admitted to the Assembly with two representatives, Josephine Burns Debono and Hélène Buhagiar. Maltese women first exercised their right to vote in the elections of 25-27 October 1947. Of the 140,703 eligible voters 54% were women. Of 76,745 registered female voters, 54,565 actually voted. Of the two women candidates, one - Agatha Barbara (1923 - 2002) - was elected. She would successfully contest ten consecutive elections, be appointed cabinet minister five times, and would be the first Maltese woman to become president of the Republic in 1982. Clearly, the road to full and effective equality for women and men in Malta did not stop with the achievement of 1947. It is still an ongoing process.