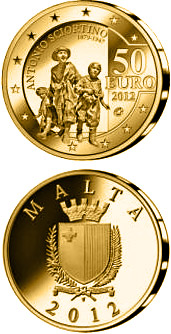 The Central Bank of Malta will issue a numismatic coin as part of the Europa Programme 2012 “European Artist” during March 2012. This coin, which will be available in gold and silver versions, commemorates Antonio Sciortino (1879 – 1947), a Maltese sculptor. He studied at L’Istituto Reale di Belle Arti in Rome and spent much of his life there, eventually becoming Director of the British Academy of Arts. He was initially influenced by Rodin, with his best works revealing this. Sciortino's favourite medium was bronze, which he used with great sensitivity. The coin depicts “Les Gavroches” (Street Urchins), Sciortino’s 1904 masterpiece based on Victor Hugo’s 1862 novel “Les Miserables”, a book that was banned by the Catholic Church at the time Sciortino completed this bronze statue. A bozzetto model of the statue was presented to Princess Elizabeth in 1951 and still forms part of the Royal Collection at Buckingham Palace. The bronze statue was placed at the Upper Barrakka Gardens in Valletta. Following restoration in 2003, it was moved to the National Museum of Fine Arts in Valletta and a replica was placed where it had stood originally at the Upper Barrakka Gardens.