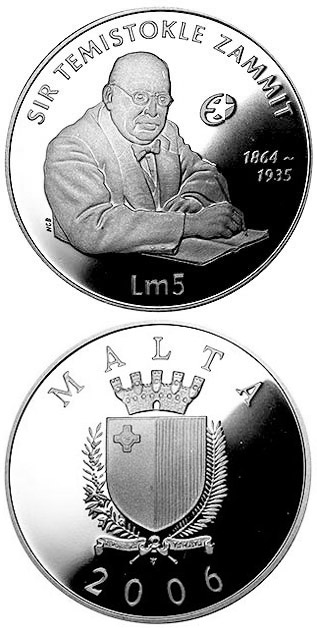 Temistokle Zammit was born in Valletta on 30 September 1864. After studying at the Lyceum and the University of Malta he obtained the degree of Doctor of Medicine in 1889. In 1905 he was appointed Professor of Chemistry in the same University, of which he was also appointed Rector in 1920. He occupied this position until 1926 when he decided to dedicate his time and uncommon intellectual faculties to the organisation of the National Museum, particularly in the archaeological field.

Sir Temi, as he was popularly known, was a man of great versatility. His scholarly interests were multifarious and he was a very prolific writer as evidenced by his numerous publications. As a scientist engaged in research work on the transmission of Mediterranean or Undulant Fever (in Malta known as deni rqiq), his name first became known in international medical circles through his connection with Sir Ronald Ross and his continuation of the work of Sir David Bruce (whose name was adopted to denominate the germ of the said fever as Brucella melitensis) in the early years of the 20th century when he discovered the micro-organism in goat’s milk. In 1920 he was awarded the “Mary Kingsley Medal” by the Liverpool School of Tropical Medicine. His name also gained renown as a result of his archaeological excavations of prehistoric sites in the Maltese Islands and also of his scholarly writings on the material found on such sites.

The range of Zammit’s publications also extends to Maltese history, literature, culture and education. His accomplishments and merits received acknowledgment in various international quarters. In 1911 Britain honoured him with the decoration of Companion of the Order of St Michael and St George and in 1930 with that of Knight Bachelor. In 1920 the University of Oxford conferred on him an honorary degree of Doctor of Literature and in 1932 he was made an “Officier d’Académie” of the French Republic. Sir Temistokle Zammit died on 2 November 1935. The obverse of the coin shows the Emblem of Malta with the year of issue 2006. The reverse depicts a likeness of Sir Temistokle Zammit with the dates of his birth and death. This coin is being issued under the ‘Europa Programme 2006 – Personalities’. The ‘Europa Star’, which is the official logo of this programme, is also shown on the reverse. The coin design is the work of Maltese artist Noel Galea Bason and it was struck at the Royal Dutch Mint.