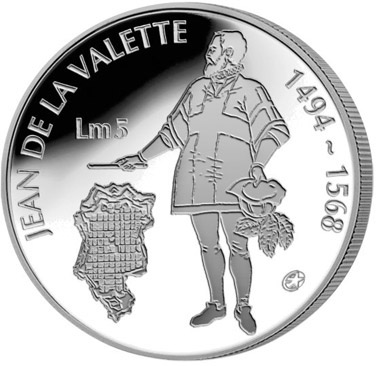 In 2007, the Central Bank of Malta issued the 'La Valette' commemorative coin as the last silver coin denominated in Maltese lira. The obverse of the coins shows the Emblem of Malta with the year of issue 2007. The reverse depicts Grandmaster La Valette with the dates of his birth and death (1494 - 1568). These coins are being issued under the Europa Programme 2007 with the theme ‘European Realisation’. The 'Europa Star' which is the official logo of this programme, is also being shown on the reverse. This coin was designed by the Maltese engraver Mr Noel Galea Bason and has been minted at the Royal Dutch Mint.