5 euro - Ten years of the euro in Malta 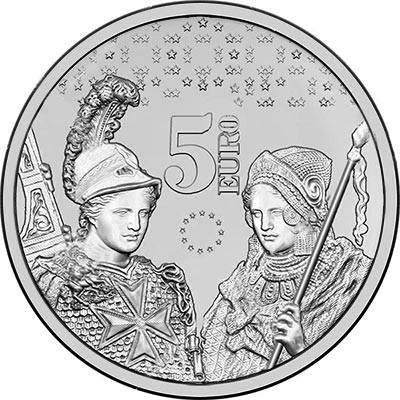 On 9 May 2018 the Central Bank of Malta will issue a numismatic coin to commemorate ten years since Malta adopted the euro. The reverse of the coins carries a stylized representation of 'Malta' and 'Europa' meant to symbolize Malta's currency transition from the Maltese lira to euro in 2008. The obverse of the coin features the coat of arms of Malta. When Malta became an EU member state on 1 May 2004 the country was committed to join the EMU and adopt the single European currency. To be able to do this Malta had to fulfil a number of conditions concerning the stability of public finances, prices, interest rates and the exchange rate. Malta adopted the euro on 1 January 2008.