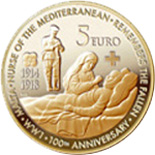 The brass coins which were designed by Noel Galea Bason were struck in circulation quality at the Royal Belgian Mint. The coin reverse features a nurse administering medication to a wounded soldier. This recalls the major humanitarian role played by Malta, called the 'Nurse of the Mediterranean', during the First World War. The figure of a soldier and a poppy, are evocative symbols of remembrance and pay tribute to the many servicemen, including some 600 Maltese, who fell during the conflict. During the war Malta had 27 hospitals and convalescent camps and more than 130,000 casualties were treated in Malta. The obverse shows the emblem of Malta.