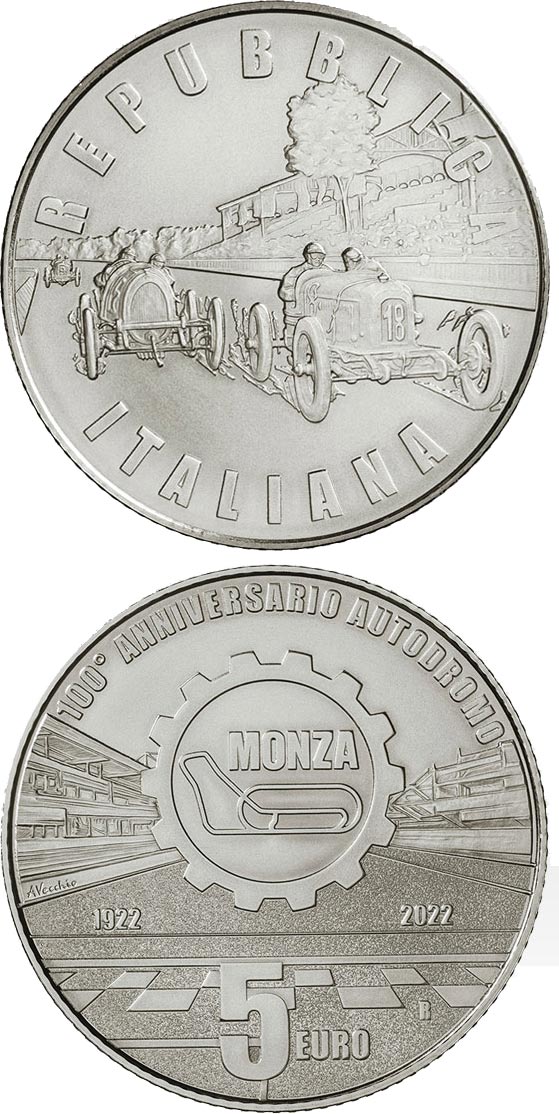 Obverse: a painting by the English designer Michael Turner reproducing a phase of the 2nd Italian Grand Prix held on September 10, 1922 at the Autodromo Nazionale Monza. In the foreground, the cars driven by Pietro Bordino, the winner of the race in a Fiat 804, and by Pierre de Vizcaya, third across the finish line in a Bugatti T29, appear on the straight. On the right, the grandstands for spectators; on the left, the “Curva Sud” exit and the third car, a Diatto type 20S driven by Guido Meregalli. Around, the inscription “REPUBBLICA ITALIANA”.
Reverse: in the centre, the official logo of the Autodromo Nazionale Monza and the dates “1922 2022”, the year the Circuit was built and that of the coin’s issue, respectively. On the right and on the left, the modern grandstands of the Autodromo Nazionale Monza. Above, the arch-shaped inscription “100° ANNIVERSARIO AUTODROMO”; on the left, the name of the designer, A. VECCHIO; in exergue, “R”, identifying the Mint of Rome, and the value “5 EURO”.