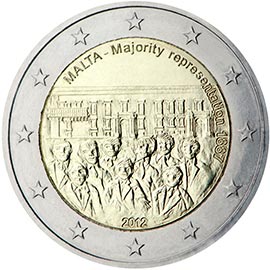 The Central Bank of Malta will issue the second in a series of five €2 commemorative coins, bearing the inscription “Majority Representation - 1887” in September 2012. After 1849, there were occasionally situations when the elected members of the Governing Council could not push forward decisions they wished to implement as they were in a minority in the Council vis-à-vis the British Governor and his nominated members. In time, a general feeling developed in favour of an elected majority, which would be in a better position to enact legislation. This was not an easy objective as Britain considered Malta a strategic fortress where security had to be assured within strict parameters. Following the unification of Italy (1861) and Germany (1871), Maltese political parties were formed and mobilised, with the Partito Nazionale led by Dr Fortunato Mizzi in the ascendant. Its main demand – an elected majority – materialised in 1887 with the granting of Representative Government. Due mainly to staunchly resisted attempts at Anglicisation, coupled with a real or imagined fear of irredentism or proselytization, this constitution was however revoked in 1903. An impasse ensued until after the First World War when, in the wake of further unrest which saw a number of Maltese demonstrators killed by British troops – the Sette Giugno – internal self-government was granted in 1921.