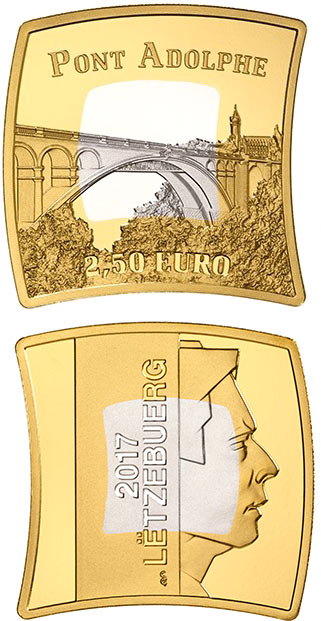 Adolphe Bridge (Luxembourgish: Adolphe-Bréck, French: Pont Adolphe, German: Adolphe-Brücke) is an arch bridge in Luxembourg City, in southern Luxembourg. The bridge takes road traffic across the Pétrusse, connecting Boulevard Royal, in Ville Haute, to Avenue de la Liberté, in Gare. At 17.2 m wide, it carries four lanes of road traffic, three to Gare and a bus lane to Ville Haute, and has two footpaths for pedestrians.
Adolphe Bridge has become an unofficial national symbol of sorts, representing Luxembourg's independence, and has become one of Luxembourg City's main tourist attractions. The bridge was designed by Paul Séjourné, a Frenchman, and Albert Rodange, a Luxembourger, and was built between 1900 and 1903. Its design was copied in the construction of Walnut Lane Bridge in Philadelphia, the United States.
The bridge was named after Grand Duke Adolphe, who reigned Luxembourg from 1890 until 1905, and was the first monarch to hold the title not in personal union with another. Although it is now over 100 years old, it is also known as the New Bridge (Luxembourgish: Nei Bréck, French: Nouveau pont, German: Neue Brücke) by people from Luxembourg City. The 'old bridge' in this comparison is the Passerelle, which was built between 1859 and 1861.