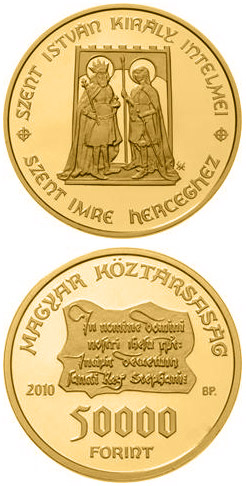 On 22 August 2010, on Saint Stephen’s Day, the Magyar Nemzeti Bank issued two gold collector coins ‘Saint Stephen’s Admonitions’ with face values of HUF 50,000 and HUF 500,000. By issuing the coins, the MNB commemorates King Saint Stephen’s advices to his son and heir to the throne Prince Saint Emeric, detailing the duties of the would-be monarch (Libellus de Institutione Morum, Book of Admonitions). Both coins were designed by Enikő Szöllőssy. They have the same coin image but different value numerals. In addition to the standard design elements (the value numerals: 50,000 and 500,000, the legend: REPUBLIC OF HUNGARY, the year of issue: 2010 and the mint mark: BP), the obverse of the coin features the introduction of the Admonitions taken from a medieval Latin manuscript, placed on an irregularly shaped parchment sheet.
The reverse of the coin depicts King Saint Stephen and Prince Saint Emeric, made after the main panel of the 15th century altarpiece in the parish-church in Matejovce (today an administrative part of the town of Poprad, Slovakia). The upper inscription on the edge of the collector coin reads ‘KING SAINT STEPHEN’S ADMONITIONS’ and the lower inscription reads ‘TO PRINCE SAINT EMERIC’. The signature mark of designer Enikő Szöllőssy is positioned in the lower part of the coin. Both collector coins are made of .986 fine gold. The HUF 50,000 face value coin weighs 6.982 grams, its diameter is 22 mm and it has a smooth edge. The HUF 500,000 face value coin weighs 62.838 grams, its diameter is 46 mm and it has a smooth edge. 5,000 pieces and 500 pieces respectively are produced of the HUF 50,000 and HUF 500,000 face value coins using the special proof technology.