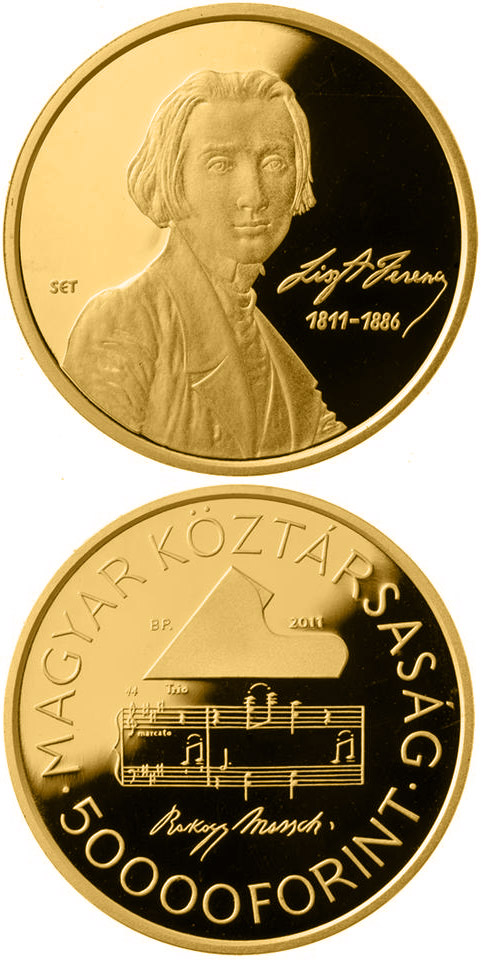 The Magyar Nemzeti Bank has issued a gold collector coin with a face value of HUF 50 000 to commemorate the 200th anniversary of the birth of Ferenc Liszt. In addition to the ‘normal’ two-ducat weight pieces, piedfort coins with double weight and thickness will also be struck. The latter are decorated with an inscription around the edge. By issuing the collector coin, the Bank pays tribute to one of the most important pianists-composers of the 19th century.

The collector coin was designed by Tamás E. Soltra. The inscription on the obverse rim of the coin reads in Hungarian ‘REPUBLIC OF HUNGARY’. Below it, the value numeral ‘50000’ and the inscription ‘FORINT’ are placed between two points. The upper centre of the coin shows a representation of an open piano lid, with the mint mark ‘BP.’ and the mint year ‘2011’ positioned horizontally on the left and the right edge, respectively. A detail of the sheet music of the Rákóczy March is featured below the representation of the piano lid, with the inscription ‘Rakoczy Marsch’ below it, the calligraphy of which is based on the handwriting of Ferenc Liszt. The centre of the obverse depicts a portrait of the young Ferenc Liszt in the centre. The signature of Ferenc Liszt and the inscription ‘1811-1886’ are inscribed in two horizontal lines to the right of the portrait. The initials of designer Tamás E. Soltra are positioned to the left of the portrait.