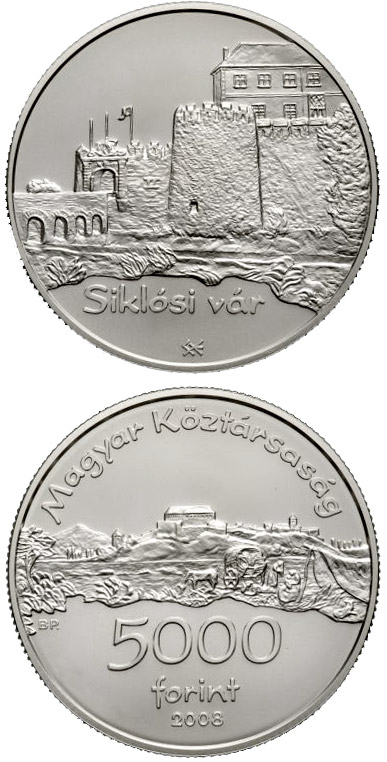 On 4 June 2008, the Magyar Nemzeti Bank issued a silver collector coin with a face value of HUF 5,000 to celebrate the Castle of Siklós. The collector coin was designed by Enikő Szöllőssy. The obverse depicts a view from the western wall, created from a 19th century steel engraving, which features the castle building, the southern tower, as well as the Franciscan monastery and church. The standard design elements, such as the legend: ‘REPUBLIC OF HUNGARY’, the denomination: ‘5000’, the inscription: ‘FORINT’ and the date of issue: ‘2008’, as well as the mint mark: ‘BP’ also appear on the obverse. On the reverse of the coin, a view of the Castle of Siklós from the north is depicted. Below the picture of the Castle, the coin bears the inscription ‘CASTLE OF SIKLÓS’, shifted slightly to the left. The collector coin is made of .925 fine silver, weighs 31.46 grams, its diameter is 38.61 mm and it has a milled edge. The mintage limit is 10,000 pieces, of which 6,000 are produced using the special proof technology.