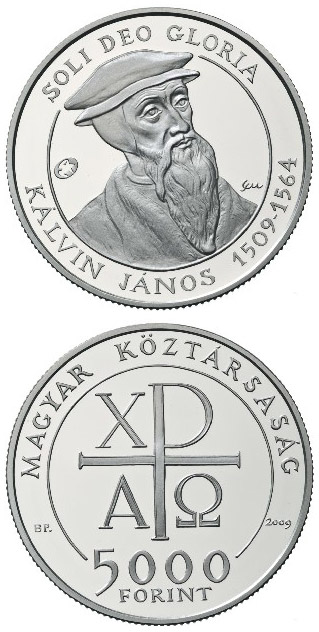 On 29 October 2009, the Magyar Nemzeti Bank issued a silver collector coin ‘Calvin’ with a face value of HUF 5,000 to commemorate the 500th anniversary of the birth of John Calvin. In addition to the standard design elements (the denomination: HUF 5000, the legend: Republic of Hungary, the mint mark: BP and the date of issue: 2009), the obverse of the coin features the monogram of Christ as it appears on the front of the pulpit in the Reformed College of Debrecen. In the centre of the reverse side is a portrait of John Calvin after a painting by Hans Holbein. The outer ring along the edge of the coin bears the legends ‘SOLI DEO GLORIA’ and ‘JOHN CALVIN 1509-1564’. The Euro-star logo, indicating that the coin was issued as part of the Europa Coin Programme, and the signature mark of the coin’s designer, Márta Csikai, are featured on either side of the portrait. The collector coin is struck in .925 fine silver. It is 38.61 mm in diameter and weighs 31.46 grams, and has a milled edge.