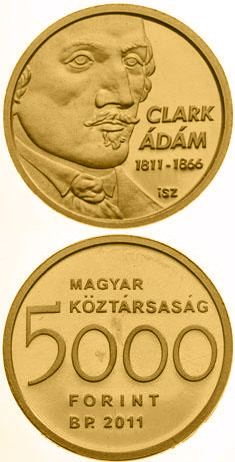 The Magyar Nemzeti Bank has issued a gold commemorative coin with a face value of HUF 5000 to celebrate the 200th anniversary of the birth of Adam Clark. By issuing the coin, the Bank pays tribute to the builder of the Széchenyi Chain Bridge and architect of the Tunnel under the Buda Castle. The obverse of the commemorative coin bears the inscription ‘REPUBLIC OF HUNGARY’, arranged in two parallel horizontal lines, the value numeral ‘5000’ and the inscription ‘FORINT’, as well as the mint mark ‘BP.’ and the mint year ‘2011’. The reverse of the coin features a detail of the portrait of Adam Clark. The inscriptions ‘CLARK’, ‘ADAM’ and ‘1811–1866’ appear in parallel horizontal lines. The initials of designer László Szlávics, Jr are located on the rim of the coin. The coin is struck in .999 fine gold. It weighs 0.5 grams and it is 11 mm in diameter and has a smooth edge.