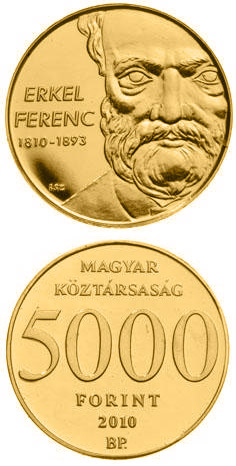 The Magyar Nemzeti Bank has issued a gold collector coin ‘Ferenc Erkel' with a face value of HUF 5,000 and a silver collector coin with a face value of HUF 5,000 to celebrate the 200th anniversary of the birth of Ferenc Erkel. Because of its small size, the gold coin is special, being the first Hungarian issue to be admitted to the international programme ‘The Smallest Gold Coins of the World'. The gold coin was designed by László Szlávics Jr and the silver coin by György Kiss. The two coins have partly identical designs: the obverse of both coins features the standard design elements (the value numerals: 5,000, the legend: REPUBLIC OF HUNGARY, the year of issue: 2010 and the mint mark: BP). The silver coin bears a representation of the birth-place of Ferenc Erkel as a main motif.
The reverse of the gold coin shows a detail of the portrait of Ferenc Erkel. The inscriptions ‘ERKEL', ‘FERENC' and ‘1810-1893' are located to the left of the portrait in parallel lines below each other. The engraver's market appears on the edge of the coin. The reverse of the coin depicts the portrait of Ferenc Erkel, with the composer's signature below it. The dates ‘1810' and ‘1893' are to the left of the portrait. The designer's mark is positioned on the edge of the coin, below the signature. The gold collector coin is struck in .999 fine gold. It weighs 0.5 gram, its diameter is 11 mm and it has a smooth edge. The silver collector coin is struck in .925 fine silver. It weighs 31.46 grams, its diameter is 38.61 mm and it has a reeded edge. 10,000 pieces of the gold coin are produced using the prooflike technology and 5,000 pieces of the silver coin are produced using the special proof technology.