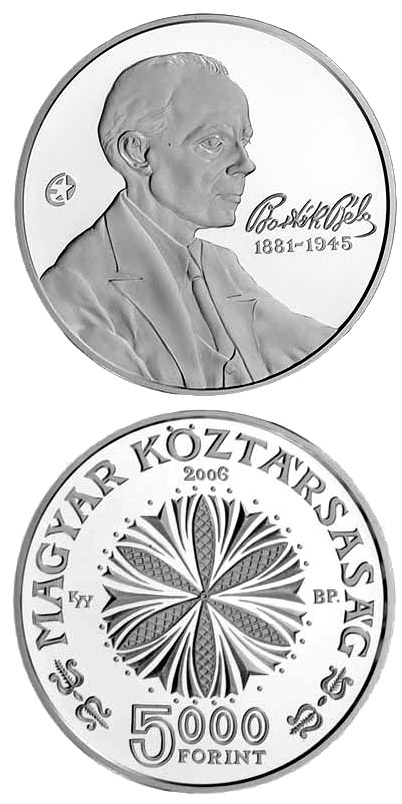 On 24 March 2006 the Magyar Nemzeti Bank issued a silver collector coin to commemorate the “125th anniversary of the birth of Béla Bartók” with a face value of HUF 5,000. The obverse of the collector coin bears a motif from Transylvanian woodcarving, while on the reverse there is a portrait of Béla Bartók. To the right of the portrait is Béla Bartók’s signature, and the dates of his birth and death, “1881-1945”. To the left of the portrait is the “Euro Star”, the joint emblem of the “EUROPA” series of international collector coins. The coin was designed by György Kiss. The coin is made of .925 fine silver, weighs 31.46 grams, and has a diameter of 38.61 mm and a finely reeded edge with the legend “BÉLA BARTÓK” on the reeding. The legend is in Italics and repeated four times with a rhombus-shaped ornament separating the repetitions. 25,000 collector coins may be struck by the special. “proof” technology.