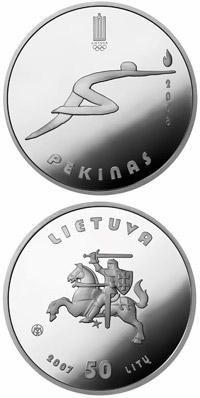 The obverse of the coin features the Coat of Arms of the Republic of Lithuania, encircled with the inscriptions LIETUVA (Lithuania), 2007 and 50 LITŲ (50 litas). A stylised figure of a runner, semi-circled by the inscription PEKINAS (Beijing) beneath him and 2008 on the right, is depicted on the reverse of the coin. On the top, it features the logo of the Lithuanian National Olympic Committee.