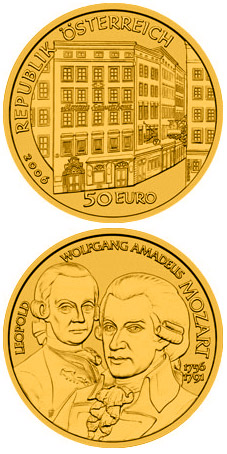 This side shows a view down the Getreidegasse (Grain Lane) in Salzburg. In the foreground is the house where Mozart was born, while the Getreidegasse stretches off back to the right. The family lived here from 1747 till 1773, and it was here that Wolfgang was born on 27th January, 1756. Today it is one of the most frequently visited houses in Austria with many thousands of Mozart fans trooping through the rooms of the Mozart family apartment each year. To the right the gold coin shows a portrait of the mature Wolfgang Amadeus Mozart, the most famous and most popular of Austria's composers. On the left and somewhat in the background, is this father Leopold Mozart. He was himself an accomplished musician and a teacher whose reputation extended well beyond the boundaries of Salzburg. Leopold wrote a treatise on playing the violin, which was regarded as a standard work in his time. He recognised his son's unique musical talents at an early age and gave him the appropriate instruction. Both portraits are based on contemporary paintings.