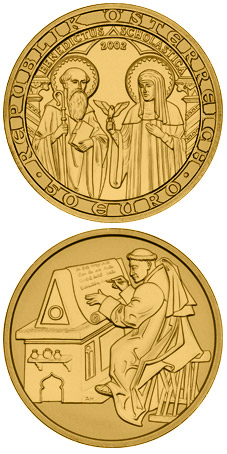 The coin shows a double portrait of St. Benedict and his sister, St. Scholastica. Not only is St. Benedict the patron saint of western Europe, he is the father of western monasticism. St. Benedict wrote a rule for monks of some 73 chapters, "a little rule for beginners". His writing is of such deep spirituality and yet so full of moderation and humanity, that the Rule of St. Benedict became the basis for monastic life from the sixth century right down to the present day. Under the leadership of his sister, he founded also an order of nuns following the same rule. The coins shows him holding a book, which is the Holy Rule. St. Scholastica holds a dove, a reference to the vision St. Benedict had of his sister’s soul rising like a dove into heaven. This side of the coin has a mediaeval monk sitting at a writing desk copying (or decorating) a manuscript. The work of the monks in the Middle Ages copying books by hand preserved great areas of knowledge for future generations. Most of the classics of ancient Greece and Rome are known to us only through mediaeval copies.