50 euro - 450th Anniversary of the Battle of Lepanto

2021 marks the 450th anniversary of the Battle of Lepanto,. To commemorate this event the FNMT is issuing two silver coins, one 8 Reales and one Cincuentin. The Battle of Lepanto was the last and largest naval battle fought by rowing galleys, which took place on 7 October 1571 in the Gulf of Patras, on the west coast of Greece, and takes its name from the port of Lepanto. The obverse of the coin shows, at the top, a detail of the head of the portrait of Philip II by Titian, which is in the Museo Nacional del Prado in Madrid, and on the left, the portrait of Álvaro de Bazán y Guzmán, by Rafael Tegeo, which is in the Museo Naval in Madrid. On the right is a portrait of Don Juan de Austria by Alonso Sánchez Coello, which is kept in the Monasterio de las Descalzas Reales, Madrid. Between both there are some “pikes”, a former weapon very well used by the spanish troops. On the reverse is a detail of the lithograph called Batalla Naval de Lepanto by Vicente Urrabieta, from the Biblioteca Nacional de España. 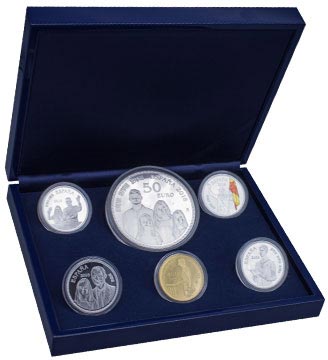