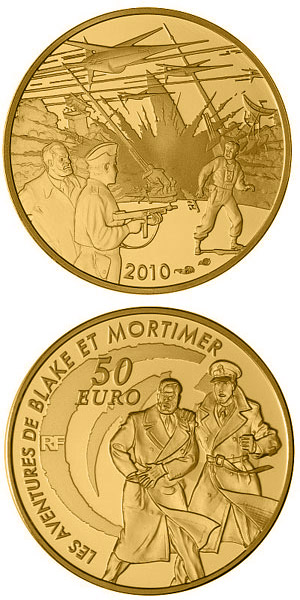 Monnaie de Paris is continuing its collection devoted to comic strip heroes and is launching in 2010 the Blake and Mortimer coin. This series shows two heroes, Sir Francis Blake, an officer of the army and Professor Philip Mortimer, a specialist in nuclear physics. The success of this comic strip is due to, amongst other things, its mixture of realism, fantasy and science fiction. The obverse of the coin features a scene taken from the "Secret of the Swordfish" where we see our two heroes arresting Colonel Olrik. In the background, "Swordfish" airplanes are on the attack. The reverse side shows Blake and Mortimer in their characteristic pose. In the background, the symbolic ‘M’ from the series is shown into which ‘RF’ has been inserted and on which the face value has been inscribed. The text "Les aventures de Blake et Mortimer" borders the left hand side.