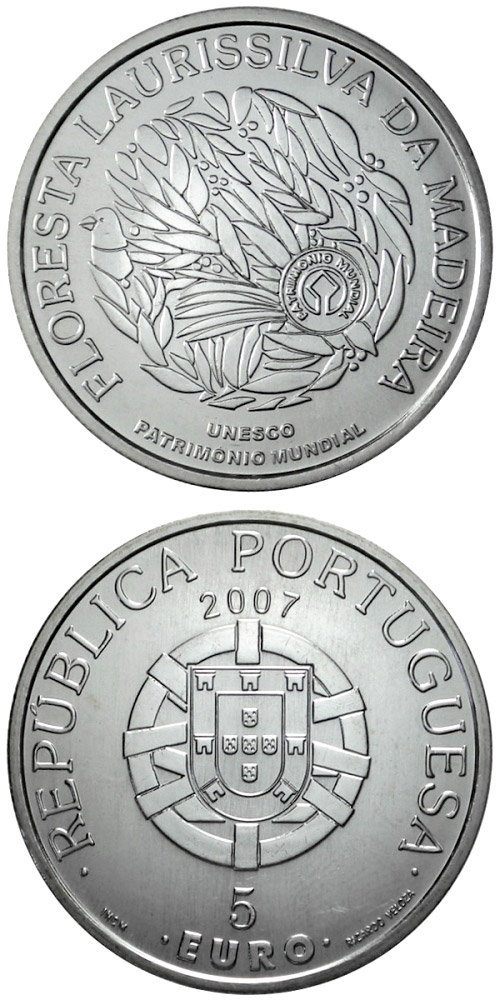 In the valleys and on the hills of Madeira’s most inaccessible inland lies a treasure of incalculable value. Extending across nearly 15 thousand hectares, there stays, protected by the island’s orography,a forest of exuberant beauty, the origin of which goes back to the Miocene and Pliocene periods of the Tertiary epoch, that is, to a time that geologists place around 20 million years ago. It is Madeira’s Laurisilva forest with more than 150 botanic species, many of them unique, extinct in Continental Europe because of climatic changes that occurred, with predominance of lauraceous trees. Recognizing the forest’s inestimable value and the vital importance of preserving it, in 1999 UNESCO classified Madeira’s Laurisilva Forest as World Heritage. With the minting of the commemorative collector coin «Floresta Laurissilva da Madeira», INCM proceeds with the series dedicated to the UNESCO World Heritage sites in Portugal, which began in 2004.
This mintage of 5-euro face value silver proof coins, a design of sculptor Ricardo Velosa, packaged in a case together with a numbered certificate of guarantee, is a limited issue of 6000 pieces.