On Tuesday, 24 November, Latvijas Banka is issuing a unique collector coin "Ventastega", dedicated to the fossil remains of Ventastega curonica, a Devonian period animal, one of the most important discoveries in geology and palaeontology. For the attention of the media and interested parties! The purchase of coins will be possible only on the website e-monetas.lv from 12.00 (noon) on 24 November. Due to the COVID-19 pandemic, the new numismatic products will not be available at the Cashier's Office of Latvijas Banka. It will be possible to receive the coins purchased on the website e-monetas.lv either by post or to pick them up at the Cashier's Office of Latvijas Banka. Please note that Should the epidemiological situation worsen, the procedure of collecting/delivery of the purchased numismatic products may be subject to change. In such a case, customers will be notified. In view of the uncertain situation, for your own safety we would advise you to consider and, to the extent possible, choose delivery by post. The silver collector coin of Latvijas Banka is dedicated to an original and outstanding evidence of Latvian history providing an opportunity to learn about and understand the course of evolution, thus making the finding of Latvia's scientists particularly important globally. The fossil remains of Ventastega curonica were found at rock exposures in the Venta River basin near Skrunda in Kurzeme. The name of the species bears reference to the Venta and Kurzeme, and by this name this animal is recognised among scientists and prehistory enthusiasts all over the world. Ventastega was a four-legged predator, with its length slightly over one metre; it lived approximately 365 million years ago. At that time, the territory of the present-day Latvia was located some degrees to the South from the equator, at the south-eastern edge of the palaeocontinent of Euramerica. Rocks and the fossils of animals and plants preserved in them are the only evidence from so ancient times. Just a few findings of Devonian tetrapod fossils are known today. Therefore, the findings of Latvian ventastega and the related lobe-finned fish are of considerable scientific importance in learning about the evolution of vertebrates. This coin is special as the ventastega's skeleton is marked with photo luminescent print. Keep the coin in direct bright light for at least 40 seconds; then look at it in the dark - ventastega's skeleton will glow. The graphic design and plaster model of the collector coin was created by artist Ivars Drulle. 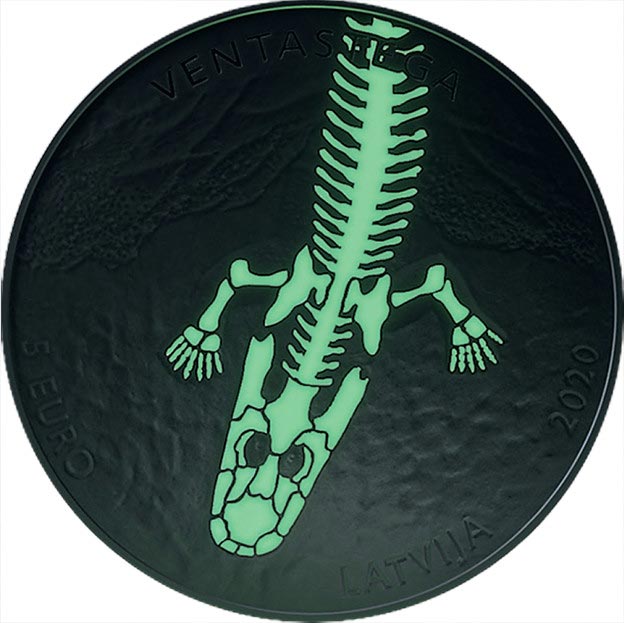