The graphic design of the collector coin "Coats of Arms Coin" was created by artist Laimonis Šēnbergs, whereas the plaster model was made by artist Jānis Strupulis. The coin was struck by UAB Lietuvos monetų kalykla (Lithuania).

The obverse of the coin depicts the great coat of arms of the Republic of Latvia, with the logo of Latvia's centenary featured below it. The reverse of the coin bears the coats of arms of Latvia's cultural and historical regions, and the inscriptions KURZEME, VIDZEME, ZEMGALE and LATGALE are placed against the background of the lion, griffin and elk, the heraldic symbols of historical coats of arms.

The coat of arms of Latvia was approved by the Constitutional Assembly on 15 June 1921. The author of its sketch was Vilhelms Krūmiņš (1891–1959), but the official version was developed by Rihards Zariņš (1869–1939). The basic elements used in the creation of the coat of arms of Latvia were the sun as well as the lion and griffin, the classical heraldic symbols related to the history of Latvia's heraldry. The three stars above the shield embody the idea of incorporating the cultural and historical regions of the country into unified Latvia. The coat of arms is supplemented with a stylised wreath of oak leaves, the symbol of strength and independence of the Latvian nation, and a red-silver-red ribbon having the proportions of the Latvian national flag.

The coat of arms along with the flag and anthem symbolised national independence. Therefore, people who used it during the years of Latvia's occupation ran the risk of punishment. It was in 1990 that the coat of arms regained its legitimacy as a token of independence, but in 1991 it was once again renewed as a symbol of the independent Republic of Latvia.

As from 8.30 on 23 October, the new coin will be on sale online via Latvijas Banka's website for purchases of collector coins and other numismatic products e-monetas.lv and at the Cashier's Offices of Latvijas Banka at K. Valdemāra iela 1B in Riga and Teātra iela 3 in Liepāja.

The price of the coin at the Cashier's Offices of Latvijas Banka and via e-monetas.lv is 53.00 euro. The maximum mintage of the coin is limited to 3000. 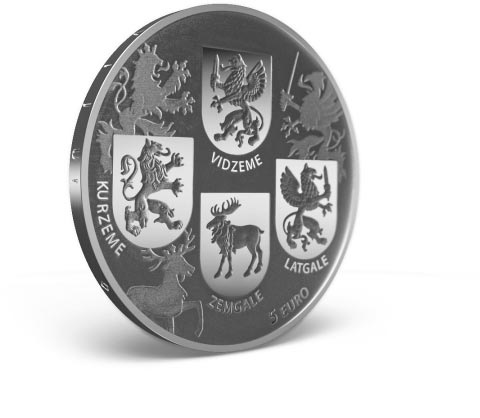