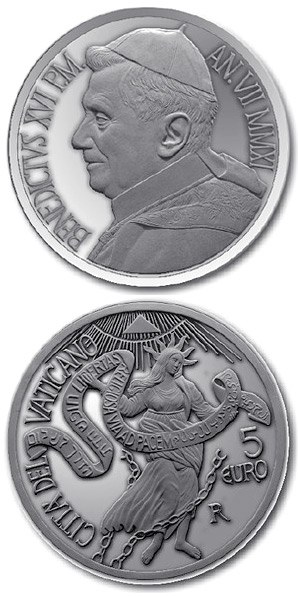 John Paul II was beatified on May 1st only six years after his death. Attributed to his intercession was the officially recognized miraculous healing of French Sr. Marie Simon Pierre Normand. The process which led to the beatification of Karol Wojtyla is quite extraordinary since five years are usually required after death before a cause for beatification can be initiated. Nevertheless, Pope Benedict XVI recognized the "reputation of holiness" which surrounded John Paul II while he was still alive, and he decided to allow the cause for beatification to begin just a few weeks after his death. The choice of May 1st was not a coincidence since the date marked the Second Sunday of Easter, which John Paul II called Divine Mercy Sunday, the vigil on which he died. The Philatelic Office is celebrating this important day with a silver 5 euro coin which depicts Benedict XVI's coat of arms on the front and a portrait of John Paul II on the back. Both images were taken from the banner displayed for the beatification.