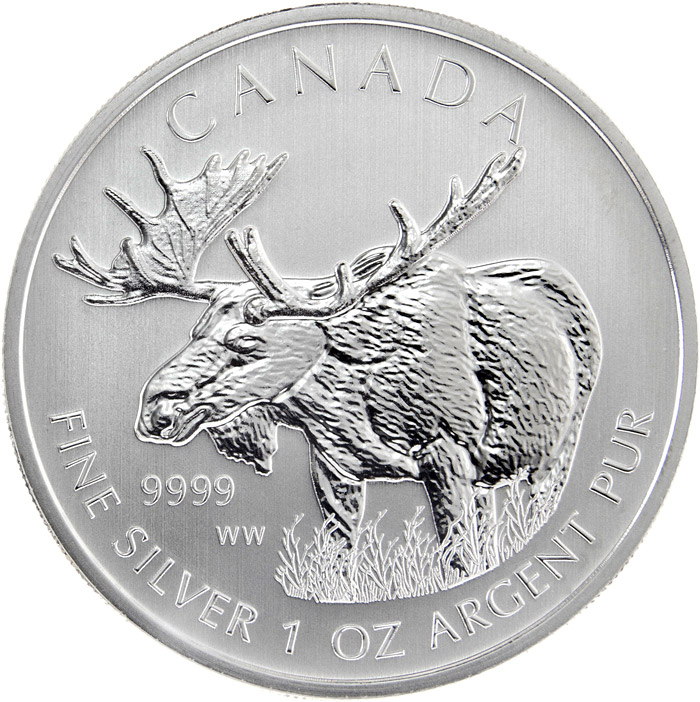 Ottawa, Ontario – February 3, 2012 – The Royal Canadian Mint's is pleased to announce that its popular Canadian Wildlife 99.99% pure one-ounce silver bullion coin series is back, and bigger than ever, with a tribute to the moose: Canada's largest land mammal. This latest addition to the Mint's pure silver bullion collection was launched today at the World Money Fair in Berlin, Germany before a premier gathering of the world's mints, distributors and buyers.

The Mint's Ottawa facility will produce up to one million "Moose" silver bullion coins and will release at least two more special issues by early 2013. A total of six different species of Canada's legendary wildlife will thus have been depicted on finely crafted bullion coins struck of the same pure silver as the Mint's world-famous Silver Maple Leaf bullion coins.

The "Moose" silver bullion coin is struck from one troy ounce of 99.99% pure silver and has a face value of $5. The design of a majestic creature which rules Canada's forests from Newfoundland to the Pacific Coast has been illustrated on the reverse of this coin by Senior Mint Engraver William Woodruff. The obverse features the effigy of Her Majesty Queen Elizabeth II, created in 2003 by Canadian portrait artist Susanna Blunt.

The 2012-dated "Moose" silver bullion coin will soon be available through the Mint's extensive network of bullion distributors. The next issue in this six-coin series will be announced later this year.