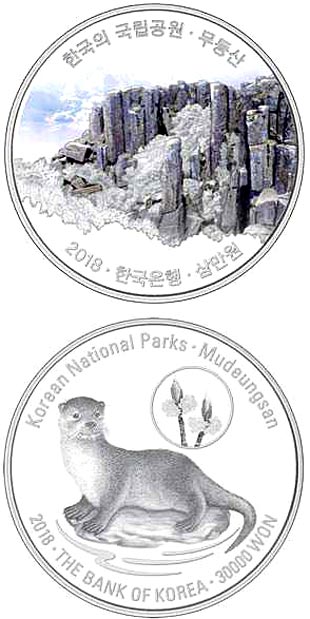 【Obverse】The obverse depicts the columnar joints* at Ipseokdae.** * The columnar joints are geological features formed when volcanic lava cracks as it cools on the earth’s surface. They result in the formation of long pillars with polygonal(hexagonal and pentagonal) cross sections. ** Ipseokdae is a group of rock pillars 10 to 13 meters high, sitting at the top of Mudeungsan and arranged in a half-moon-shaped formation. 【Reverse】The reverse shows the otter* and Lindera sericea,** two flagship species of Mudeungsan. * The otter is designated as a Class I endangered species. It has a streamlined body covered with dark-brown fur (Korean Natural Monument No. 330). ** Lindera sericea is a deciduous shrub with yellow flowers found in the valleys of Mudeungsan.