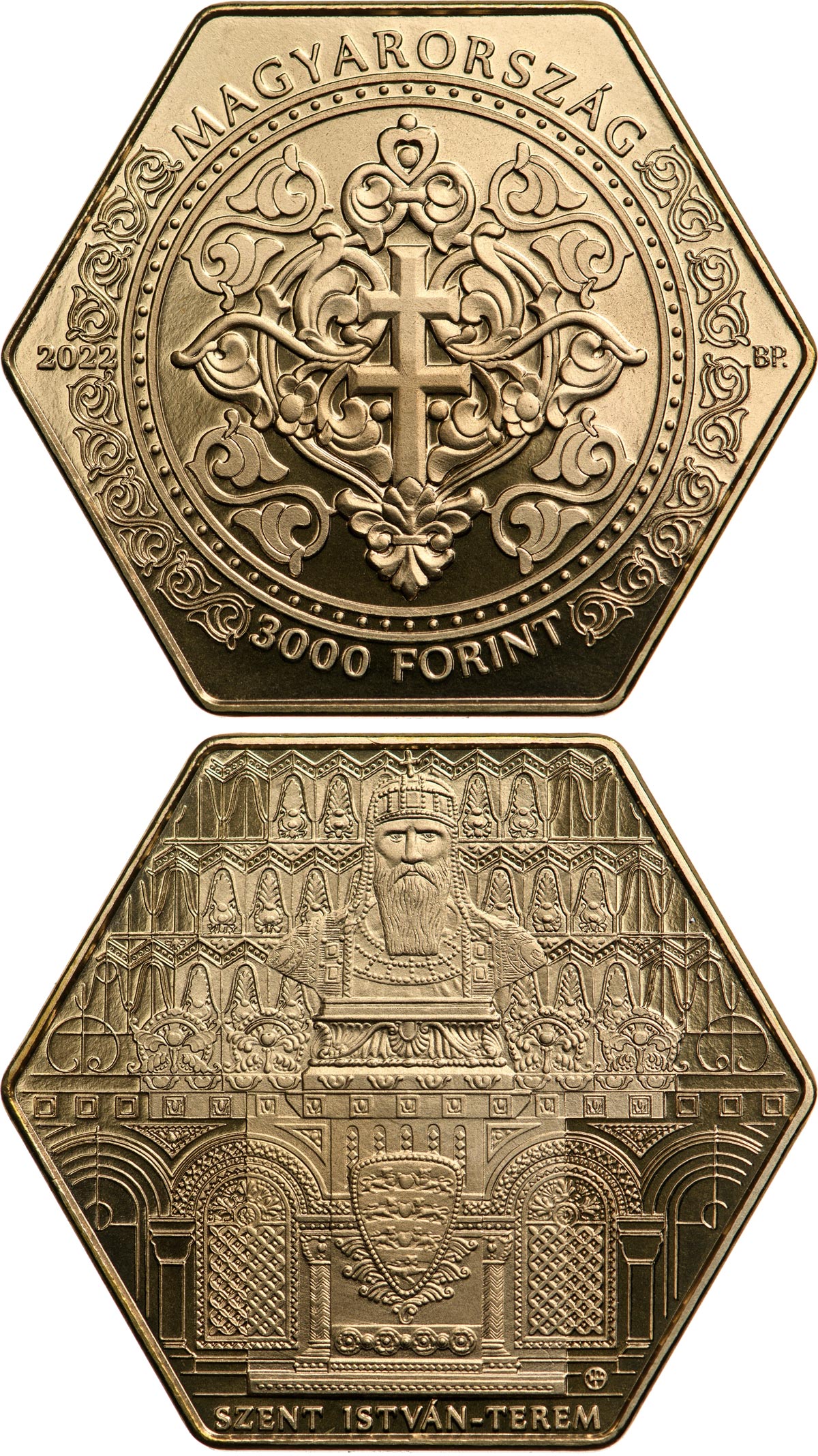 The Magyar Nemzeti Bank will issue a special, hexagonal non-ferrous metal collector coin named ‘Szent István-terem’ (St Stephen's Hall). The Bank will launch a new series of collector coins depicting the reconstructed representative hall and its outstanding details and showcasing the achievements of the National Hauszmann Programme. Uniquely among MNB issues, if fit together, the pieces of the series form a honeycomb structure. The non-ferrous metal collector coin of 3,000 forints, made from Nordic gold material was designed by applied artist Zoltán Endrődy. In 2019, the National Hauszmann Programme was launched with a view to restoring the Buda Castle District, Hungary's outstanding intellectual and cultural heritage, to its original appearance at the turn of the 19th and 20th centuries, as envisioned by architect Alajos Hauszmann. The St Stephen's Hall, an ornate historic room that was the pinnacle of Hungarian craftsmanship at the turn of the century, was rebuilt under the Programme. Vilmos Zsolnay's initiative was taken over by Alajos Hauszmann, the architect responsible for the extension of the Royal Palace, and he eventually created three historic halls in honour of great Hungarian monarchs. The St Stephen's Hall, built in neo-Romanesque and Hungarian Art Nouveau style, commemorates the Árpád dynasty, and was designed by some of the most renowned artists and craftsmen of the time. The specially crafted inlaid parquet and wood-panelled walls, unique curtains and furniture, and magnificent Zsolnay ceramics make the room a work of art in its own right. The hall also received international acclaim at the 1900 Paris Exposition. Completely destroyed in the World War II, hundreds of experts have worked in recent years to recreate the St Stephen's Hall in a modern and authentic reconstruction of the original. The finished hall was opened to the public on 20 August 2021. To mark the first anniversary of this special occasion, the Magyar Nemzeti Bank will issue a collector coin named ‘Szent István-terem’. The reconstruction is one of the highlights of the National Hauszmann Programme, and its presentation on a commemorative coin offers an excellent opportunity to raise awareness of the objectives of the renewal of the Buda Castle Quarter. The primary role of the St Stephen's Hall commemorative coin is therefore to raise awareness with no role in cash circulation. As part of the planned 7-piece series of collector coin series, designed to fit together, it is planned to produce collector coins of buildings renovated or rebuilt under the National Hauszmann Programme, as well as other sites in the castle, on an annual basis. The issuance marks the start of a unique series of MNB issuances, as when combined, the elements of the series form a honeycomb structure. The obverse of the collector coin, launching the series, features a circular tapestry of the redecorated hall, with the Patriarchal cross in the centre and other decorative elements of the tapestry around it. The compulsory design elements of legal tender are also placed on the obverse: breaking the decorative motif, in a semi-circular legend at the top, the lettering ‘MAGYARORSZÁG’ (Hungary), at the bottom the denomination ‘3000 FORINT’, on the left edge the mint year ‘2022’, and on the right edge the mint mark ‘BP.’. The reverse shows a section of the Zsolnay fireplace, the dominant feature of St Stephen's Hall, with a bust of St Stephen in the centre. The motif is represented by structured lines in the form of a plan at the edges, which are replaced by increasingly higher plasticity towards the centre, referring to the process of realisation of the plans. Below the central motif , the inscription ‘SZENT ISTVÁN-TEREM’ can be seen. Coin designer applied artist Zoltán Endrődy’s master mark is found at the bottom right hidden in the representation.