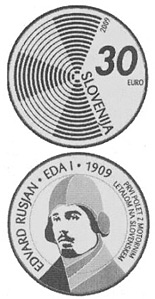 The year 1909 was full of innovations in aviation, technical solutions and competitions in the duration and length of flights. In that year, too, the aviation enthusiasts and brothers Edvard and Josip Rusjan made their first aircraft, the EDA I, which was 12 metres long and had a biplane wingspan of 8 metres. This aircraft first flew in November: at a height of two metres it flew for 60 metres. This was not merely hops, but actually the first proper powered flight, during which the aircraft consistently responded to commands. The Rusjan brothers prepared the EDA I again for flight, and on 29 November 1909 during a flight at Male Rojce pri Gorici the aircraft rose 12 metres into the air and flew for 600 metres. The flight could have been even longer if Edvard had known that everything was all right with the aircraft. He opted to land and calmly lowered the craft onto the meadow. The brothers, who reported regularly to Vienna, wrote in their report that "during the flight the aircraft described a fine circle". Reporters wrote that "Edvard flew around Roje at a speed of 40 km an hour". The brothers planned to perform the third series of flights on 6 December 1909, but there was an accident and the EDA II aircraft was almost destroyed. The Rusjan brothers scavenged the usable parts of the aircraft and constructed the EDA III.

Edvard Rusjan (6 July 1886 – 9 January 1911) was a Slovenian aircraft constructor and aviator who made the first flight in Slovenia, in the biplane EDA I. He built the plane together with his brother Josip. The Rusjan brothers made technical improvements to their aircraft, producing at least six different versions. In Zagreb they wanted to set up a factory for series production and sales of aircraft. In 1910 they made a prototype aircraft capable of taking off after just 28 metres on the runway, which at that time was a world record. During a tour of Balkan cities, on 9 January 1911 owing to bad weather Edvard Rusjan crashed at the foot of the Belgrade fortress of Kalemegdan and was fatally injured.

On the centenary of the first flight by a powered aircraft in Slovenia, the Republic of Slovenia is issuing special collector coins. The front of the coin shows part of a rotating aircraft propeller, and the back shows Edvard Rusjan in a leather helmet of the kind worn by the first aviators.