30 euro - Presidency of the European Union 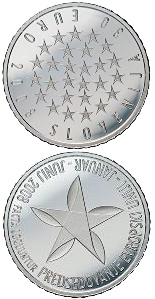 The EU Council presidency of Member States was introduced by the Treaty establishing the European Community (the Treaty of Rome of 1957), which provides that Member States alternatively assume the function of president of the Council of Ministers for a period of six months.

In December 2004, the Council of the European Union adopted the decision that Slovenia will preside over the EU Council from 1 January 2008 to 30 June 2008 together with Germany and Portugal in the first joint presidency. Slovenia will have three important groups of duties during its presidency: (1) managing the work of all structures of the Council of the European Union and the European Council, (2) representing the EU Council in its relations with other EU institutions and (3) representing the EU in the international community.

The presidency of the EU Council is an important political honour for Slovenia. In 2007, Slovenia became the first new Member State to adopt the euro, a process which proved to be fast and efficient. Slovenia will also be the first new Member State to serve as president. The presidency is confirmation that Slovenia is a country that Europe trusts and treats as a stable political institution capable of responsibly representing Europe on the international stage.

To mark Slovenia's presidency of the European Union, the Republic of Slovenia has issued collector coins with a "dynamic" EU star in the form of a windmill on the front side. The star represents Slovenia's initiative, movement, energy, volition, strength and active role during the EU presidency. Furthermore, the inscription on the coin "Facta loquuntur" ("works speak"), indicates that the EU presidency will be geared to results and success. On the reverse side, 27 dynamic stars represent the 27 EU Member States.