No other animal inspires such a mix of fear and fascination as the shark. This is not only due to their sharp teeth, dead eyes and torpedo-like build, which give them the appearance of a cold-blooded killer, but also to the fact that their natural environment is one in which we humans feel particularly vulnerable. The seventh coin in our glow-in-the-dark Colourful Creatures series features the most fearsome shark of them all – the Great White. As its rows of teeth grow behind the front row, so that when a tooth breaks off a new one takes its place, a shark can grow up to 30,000 teeth over the course of its lifetime. A shark’s olfactory centre can take up to a third of its brain mass and its eyes are ten times more sensitive to light than human eyes, but a shark’s dorsal fin is its most iconic feature. The mere sight of a shark’s iconic dorsal fin rising above the surface of the water is enough to strike terror into the heart of anyone unfortunate enough to find themselves out of their depth, both literally and metaphorically. Of course, few sharks are naturally man-eaters and humans are a far greater danger to sharks than sharks are to humans – every year 2 million sharks are killed worldwide, with their fins being used in soup and for aphrodisiac purposes in the Far East. Like all the other 3 euro Colourful Creatures coins in the series, The Shark features all 12 animals in the series in silhouette on its obverse. 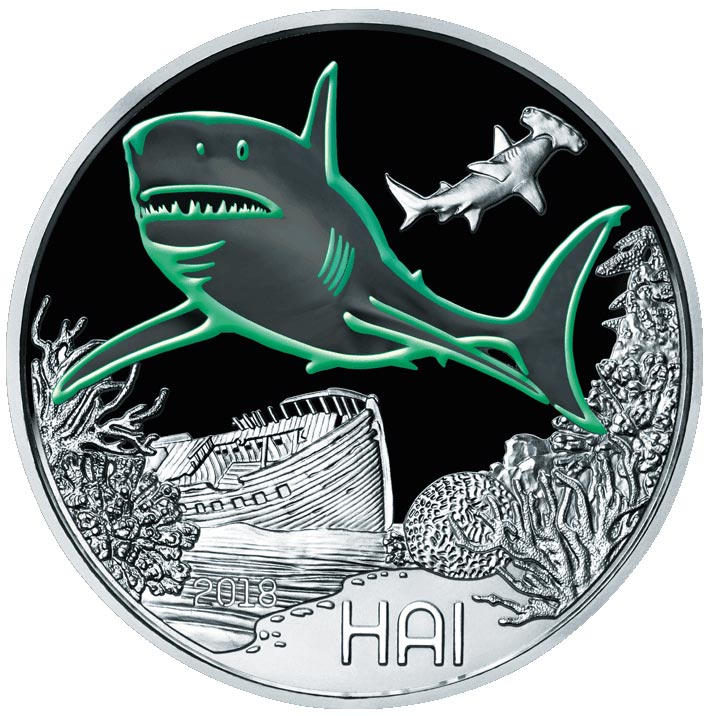