Found on every continent except Antarctica, the owl is a mostly solitary and nocturnal bird of prey comprising 200 different species. Its eerie call, squat body and disproportionately large, staring eyes, which are forward-facing rather than on the side of its head, make the owl one of our most idiosyncratic and distinctive birds. The eighth coin in the Austrian Mint’s best-selling glow-in-the-dark Colourful Creatures series, The Owl is as distinctive as the magnificent bird itself. Few sights in nature are as other-worldly as a perched owl rotating its head as much as 270 degrees, enabling it to see behind without moving its torso. Although owls can stare, their eyes are immobile, so they compensate by turning their heads instead of moving their eyes. Owls can do this because they have 14 neck vertebrae whereas humans only have 7, which makes the bird’s neck more flexible. Eyesight is a particular characteristic of the owl that aids in nocturnal prey capture. It is the bird’s eerie nocturnal activity that no doubt leads to its reputation for being a harbinger of ill health and death in some cultures; a belief that is widespread even today. In Western cultures, the owl is generally associated with wisdom. In modern Japan, owls are regarded as lucky and are carried in the form of a talisman or charm. Like all the other 3 euro Colourful Creatures coins in the series, The Owl features all 12 animals in the series in silhouette on its obverse. 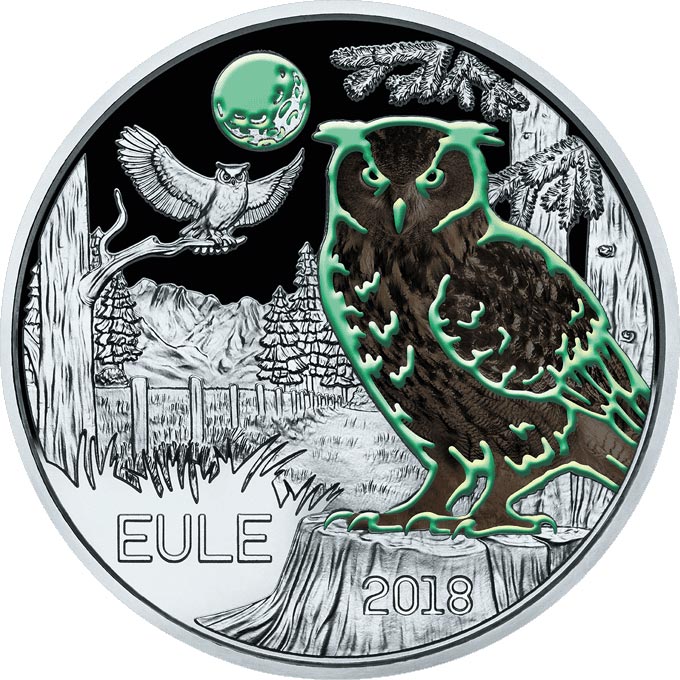