At 18 metres in length and weighing a whopping 9 tons, the Spinosaurus was the largest carnivore to have ever walked the Earth, even outranking that most iconic of prehistoric predators, the Tyrannosaurus rex. As such, Spinosaurus is the perfect way to launch our superlative 12-coin Supersaurs series, which brings prehistoric giants back to life in the shape of 12 superb glow-in-the-dark coins. Each one of the 12 prehistoric beasts featured in the series possessed an exceptional quality, such as the most sophisticated hunting skills, the longest claws or the most powerful bite, to name but a few. Meaning ‘spine lizard’, Spinosaurus Aegyptiacus lived some 100 million years ago in what is now known as North Africa, where Spinosaurus remains were discovered for the first time in Egypt in 1912. The head and jaws of the dinosaur were long and narrow, not unlike those of the contemporary crocodile, and like that semiaquatic reptile, the Spinosaurus is thought to have been at home both on land and in water, and to have existed on a diet of both land and marine animals. One major difference between the Spinosaurus and the contemporary crocodile, other than size, was the presence of distinctive 1.65-metre long spines on the dinosaur’s back. There is some debate about whether they were covered in fat and formed a hump or were joined by skin and formed a sail-like protrusion, not to mention the actual function of the appendage, be it temperature control or simply display. Spinosuarus features all 12 prehistoric animals in the Supersaurs series in silhouette on its obverse, while a colour-printed Spinosaurus is shown on the coin’s glow-in-the-dark reverse. All 12 of the 3 euro coins in the Supersaurs series are legal tender in Austria. 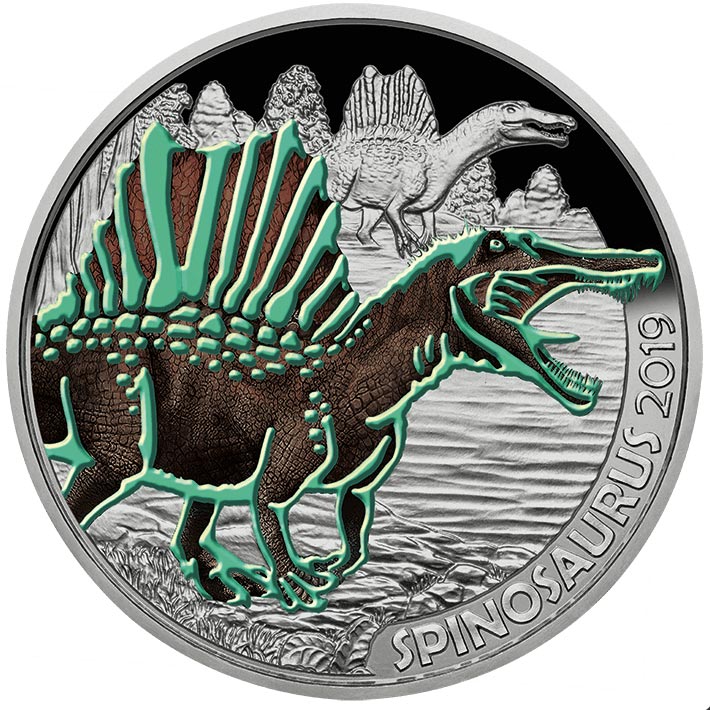