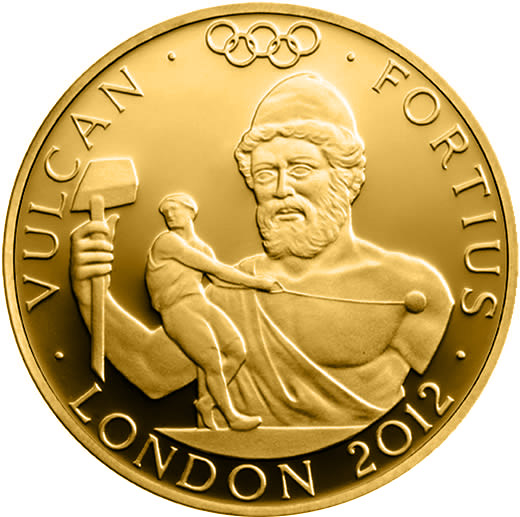 The Gold Series ‘Faster, Higher, Stronger’ is the signature collection in the Olympic Coin programme. Here we present one of the two £25 coins in the ‘Stronger’ set. Containing a quarter-ounce of 22 carat gold, this impressive coin features an original design created specially for the London 2012 Olympic and Paralympic Games. It depicts the Roman god Vulcan looking down on an athlete about to throw a hammer, as well as the official Olympic Rings symbol. Created by the award-winning sculptor John Bergdahl, the Proof quality coin is intricately detailed and exhibits all the world-renowned craftsmanship of The Royal Mint. The obverse shows the head of Her Majesty The Queen by Ian Rank-Broadley FRBS. Roman gods and goddesses were chosen for this series to reflect the official Olympic motto ‘Citius, Altius, Fortius’. Vulcan is the ancient God of Fire in Roman mythology, and was skilled in the art of metalwork. He built palaces for the other gods, made armour for the hero Achilles and a sceptre of power for King Agamemnon. The Hammer Throw has been a regular event of the modern Olympic Games having been first included in 1900. Bergdahl’s juxtaposition of god and athlete dramatically captures the strength and might of this popular sport. This impressive gold coin is presented in a specially designed walnut-veneer display and is one of the finest permanent souvenirs of the London 2012 Olympic and Paralympic Games.