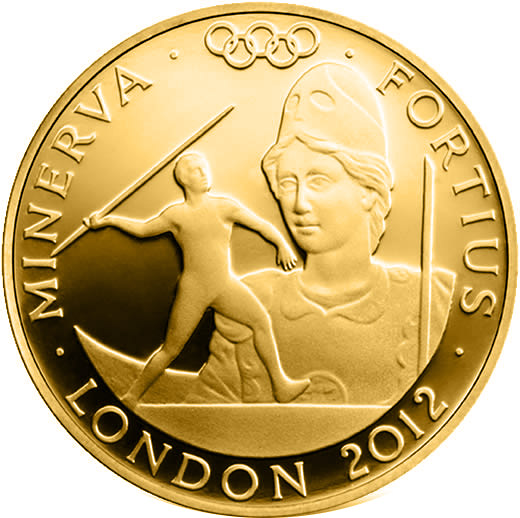 The Gold Series ‘Faster, Higher, Stronger’ is the signature collection in the London 2012 Coin programme. Here we present one of the two £25 coins in the ‘Stronger’ set. Containing a quarter-ounce of fine gold, this elegant coin features an original design created specially for the London 2012 Olympic and Paralympic Games. It depicts the ancient goddess Minerva looking at an athlete about to throw a javelin, as well as the official Olympic Rings symbol. Created by the award-winning sculptor John Bergdahl, the Proof quality coin is intricately detailed and exhibits all the world-renowned craftsmanship of The Royal Mint. The obverse shows the portrait of Her Majesty The Queen by Ian Rank-Broadley FRBS. Roman gods and goddesses were chosen for this series to reflect the official Olympic motto ‘Citius, Altius, Fortius’. Minerva is one of the great Roman divinities, and is the personification of thought, calculation, and inventive power, said to have invented numbers. In ancient times, the javelin was a weapon. It was lighter than a spear, and designed to be thrown rather than thrust, so it was used in long-distance battles. Athletes competed with a lighter version with a leather thong wound around the middle which caused the javelin to spiral in flight. All the poise and power of this solo sport is dramatically captured on this impressive gold coin, which is presented in a specially designed walnut-veneer display case as a long-lasting memento of this unique event.