Artificial Intelligence looks to a future that is both fascinating and unforeseeable. The coin’s reverse features the outline of a head that symbolises our ignorance about the future functioning of humanoid ‘super intelligence’. The fact is that we do not know what will happen when artificial intelligence has worked out how to improve itself and no longer relies on us. Will it imprison us or will it set us free? Only time will tell, but in the meantime the thought-provoking 2019 addition to our bestselling Silver Niobium series uses its electric-blue niobium core and silver outer ring to beautifully visualise our uncertainty. In the form of computer systems able to perform tasks that normally require human intelligence, we have been using artificial intelligence to think for us for several decades. Highly functioning and always available, computers help us go about our daily business in a reliable fashion without us even noticing. The coin’s reverse also symbolically depicts some of the ways in which artificial intelligence does that, in the form of the e-health system, smart machines, processors, digitalisation, data analysis and artificial neural networks. Neural synapses spread from its silver outer ring into the niobium core where they meet a binary code, while the coin’s obverse shows an inverse dynamic: conductor paths extend to the silver outer ring from a processor in a humanoid robot in the electric-blue niobium core. 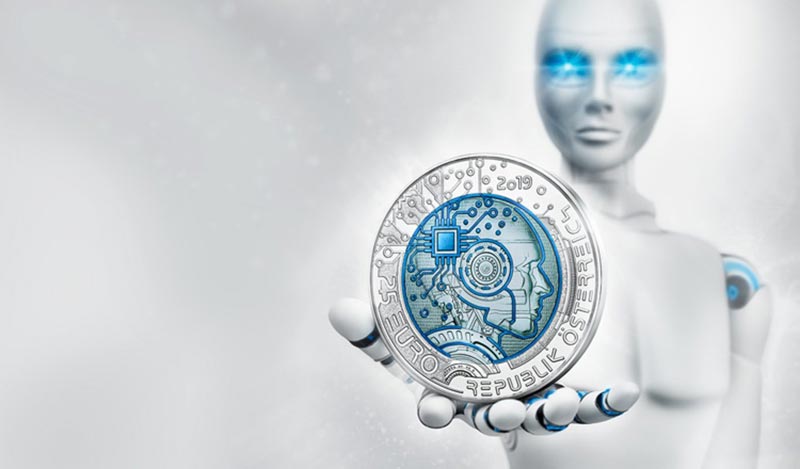