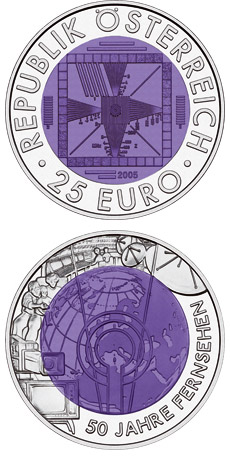 The obverse, or official side of the coin has "Republik Oesterreich" and 25 euros struck in the outer silver ring, while the inner violet niobium core depicts the original "test" pattern that was used in the 1950’s for calibration and focusing a television. The test pattern developed by an artistic group known as "Institut der Rundfunktechnik" (Institute of Radio Technology) was shown at the beginning of the broadcast day and then again just prior to the broadcaster signing off at the end of the day. In the last few years the test pattern has become an art object. On the reverse of the coin one can see a portion of the globe in the background on the violet niobium core and in the foreground the small television antenna or so called "rabbit ears" that were required by all early analog television sets to receive the broadcast signal.