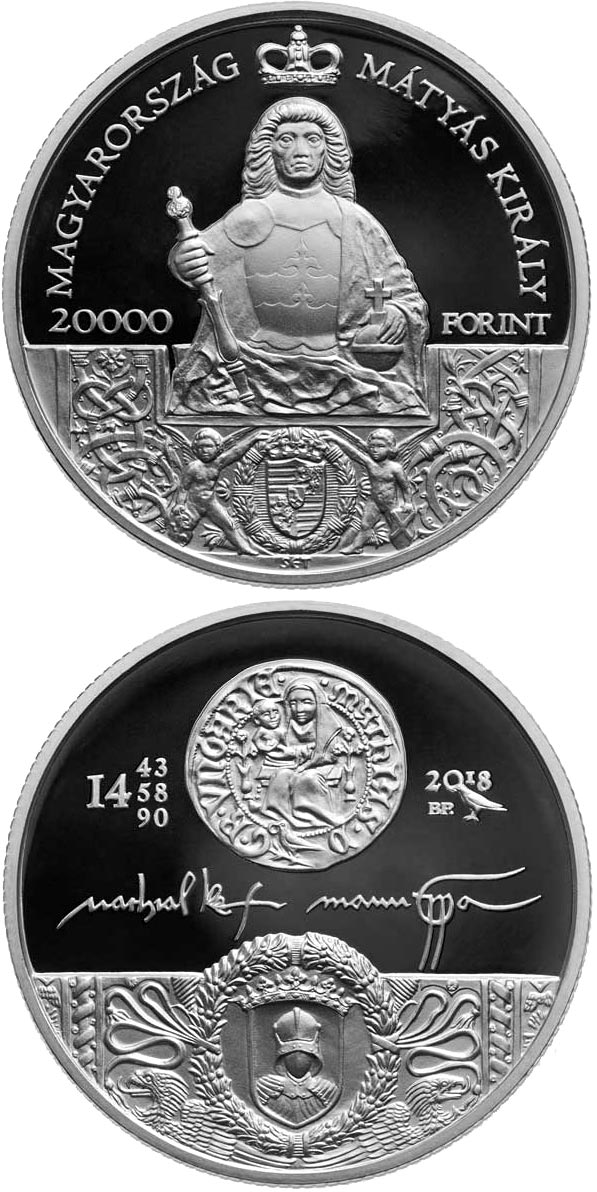 The Magyar Nemzeti Bank will issue a particularly large silver and its non-ferrous metal version to commemorate the 575th anniversary of Matthias Corvinus’ birth and the 560th anniversary of his enthronement on 19 November 2018. The collector coins with face values of HUF 20,000 and 2,000 will be presented by the Bank at the press conference organised jointly by the House of Hungarians and the National Archives of Hungary. To commemorate the Matthias Corvinus anniversary year the Magyar Nemzeti Bank will issue a particularly large silver collector coin with a face value of HUF 20,000 and its non-ferrous metal version with a face value of HUF 2,000. The ‘Matthias Corvinus Anniversary Year’ commemorative coins are legal tender in Hungary, but they do not serve circulatory purposes. Primarily, they are a means to commemorate and pay tribute to the outstanding king of Hungary. The silver and the non-ferrous metal versions have the same design, the only difference being their denominations. The choice of motives on the collector coins present Matthias Corvinus’ reign in a complex manner. As the central motif on the obverse a part of the Matthias relief of Bautzen is shown. This piece of art is known to have been approved by Matthias himself, and although it does not resemble the well-known Matthias portraits, his representation in arms complemented by regalia (a sceptre in his right hand and a globus cruciger in his left with a crown above his head) is authentic. The king of the Enlightenment considered the development of science and arts important and he adored books. Allegedly, 2000 hand-written codices were kept in the royal palace, which was almost the size of the library in the Vatican. Therefore, the main motif taking up the lower design area is an ornamental fragment of Matthias’ corvina depicting a coat-of-arms making an attempted reference to the king’s commitment to sciences and arts. Beneath the coat-of-arms the master mark of the sculptor and coin artist E. Tamás Soltra is shown who designed the coin. The reverse makes a reference to the results Matthias achieved in organising the military, and to the role he took in state affairs, as well as his financial reforms. The lower third of the reverse is decorated with another reliable source: a piece of Matthias’ mass clothing made from his throne drape, with a depiction of gothic helmet and armour fragments in the centre representing Matthias’ achievements as a strategist and an organizer of the military. Matthias was the first of the Hungarian kings, who constantly kept an army of paid mercenaries from the significantly increased royal income. Matthias was the first Hungarian king, whose signature on official charters is still available in great numbers. The king took a significant part in state affairs: his calligraphic signature appears on the reverse. Just as a coin on a coin, Matthias Corvinus’ golden forint is featured on the upper part of the reverse, which is a reference to the financial reform implemented by the king, and to the novelty of the Madonna composition on coins determining the design for a long time.
MUDOR Coin Collection Holder Album for Collectors 240 Pockets Coin Collection Book Supplies shop now