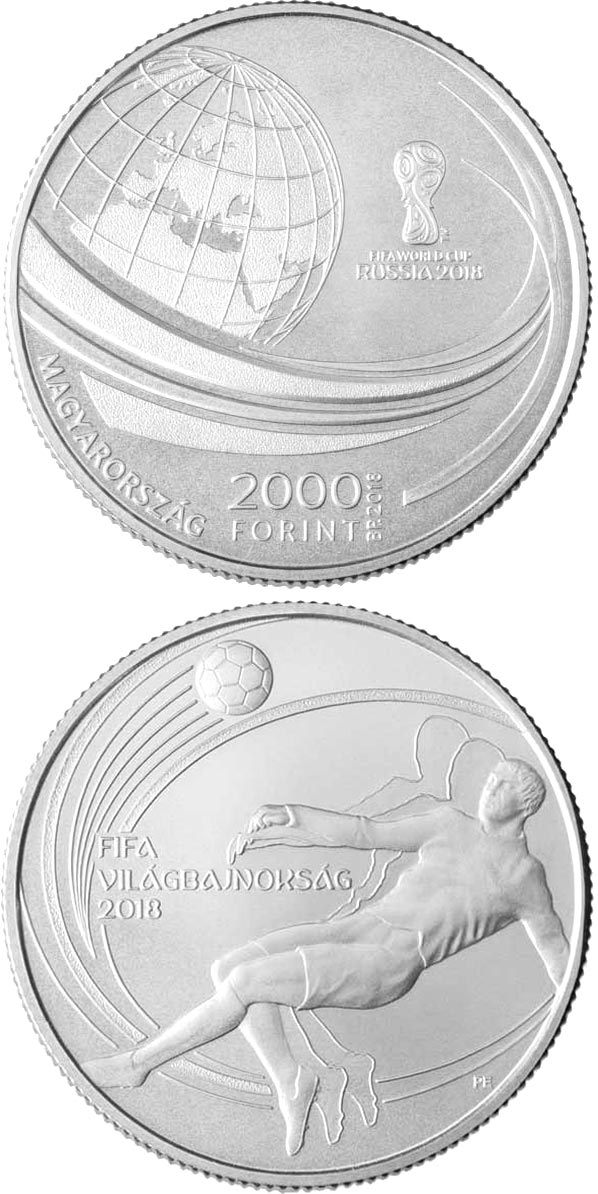 Budapest, 22 February 2018 – The Magyar Nemzeti Bank will issue silver commemorative coins named “2018 FIFA World Cup Russia™” with a face value of HUF 5.000 and the non-ferrous metal version thereof with a face value of HUF 2.000 on 23 February 2018. To honour the most renowned event in football the Bank has issued commemorative coins since 1981.

The international football association (FIFA) was founded in Paris in 1904. Currently headquartered in Zurich, it is divided into 6 regional confederations, and its membership comprises 211 national associations. Hungary joined the Association in 1907. FIFA organises Men’s and Women’s World Cups and another 13 world cups, world championships for men and women of different age groups. Every year the best men’s and women’s player, as well as the best coach of the year are selected by voting, and the player, male or female, judged to have scored the most aesthetically significant goal, wins the FIFA Puskás award.

In the history of FIFA Word Cups, Hungary has played in the final twice: The Hungarian national football team finished runners-up in Paris in 1938 and in Bern in 1954, winning the silver medal. In 1994, the World Cup final was supervised by Sándor Puhl and it can be considered as a success of the Hungarian football.

The commemorative coins to honour the 2018 FIFA World Cup Russia™ are legal tender in Hungary, but they do not serve circulatory purposes. Primarily, they are a means to raise awareness, and to tribute the outstanding performances at international sports events, and the spirit of sports. The silver and the non-ferrous metal versions have the same design, the only difference being their value numerals.

On the obverse side of the commemorative coin the stylised representation of the Earth is shown. The orbits of satellites suggest the rotation of the planet and the dynamic nature of sports. The motif refers to the global significance of the sports event. To the right, the official logo of the 2018 FIFA World Cup Russia™ is shown. The compulsory design elements are also featured here: the lettering “MAGYARORSZÁG” in the lower legend, the lettering “5,000 and 2,000 FORINT” in two lines, one below the other, and vertically oriented, the mint mark ‘BP.’, as well as the year of issuance ‘2018’; all in one column. The micro lettering representing the mint mark provides protection against counterfeiting, which was placed on the left side of the circle running to the right of the mint year. The security element is visible only when magnified at least ten times.

On the reverse the stylised figure of a football player is shown performing one of the most spectacular moves in today’s acrobatic football: the scissors kick. The dynamics of the move is highlighted by the two phases shifted in time, and the curves around the flying ball, which are also featured on the obverse. On the reverse side the lettering “FIFA VILÁGBAJNOKSÁG 2018” is displayed in 3 rows one below the other. On the bottom right edge of the coin Erika Puskás’ master mark is shown, who created the graphics design of the commemorative coin. The plaster model was made by István Kósa on the basis of the graphics artwork.