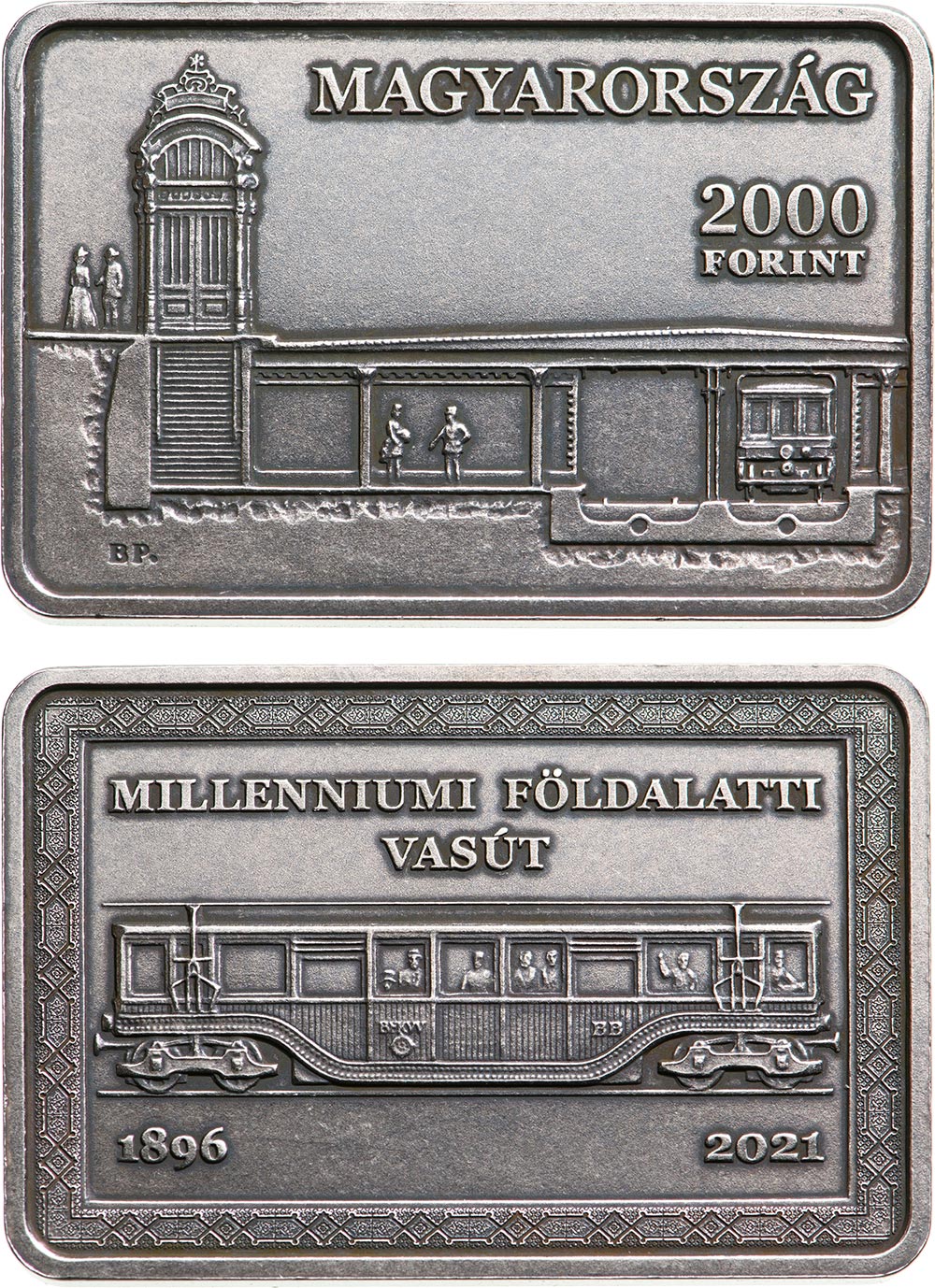 The Magyar Nemzeti Bank will issue a 2000-forint non-ferrous metal collector coin on 3 May 2021 to honour the 125th anniversary of the inauguration of the Millennium Underground Railway commonly known as the Kisföldalatti (the small underground). This is the first time the MNB’s collector coin programme features a rectangular coin in a special finish tarnished by machine. The special coin was designed by applied artist Balázs Bitó with professional assistance from the Hungarian Museum Science, Technology and Transport. In Budapest, the millennium underground railway was launched on 2 May 1896, which was the first underground tram in Europe. Even Franz Joseph I of Austria took a trip on the underground tram constructed for the opening of the monumental, millennial exhibition spanning across Hungary. In the course of its construction, state-of-the-art solutions in architecture were used, including industrial reinforced concrete technology. An automated, mechanical security equipment, used on the railway, prevented the cars from colliding. Undergoing several refurbishments, the original cars had remained in use for 77 years until the railway was upgraded in 1973, which had been unprecedented before in the world. Widely known as the Kisföldalatti (the small underground), the underground railway was added to the list of world heritage sites in 2002 alongside Andrássy Aveneue. The central motif on the obverse features an engraving from one of the Millennium Underground Railway stops based on a drawing from the 18th century. The representation of the stop clearly shows the uniqueness of the shallow subway, namely that it is not far from the surface. The technical representation of the underground stop is enhanced by figures in clothing of the time. The compulsory design elements of legal tender are also placed on the obverse: aligned to the right on top the lettering ‘MAGYARORSZÁG’ (Hungary), below that the denomination ‘2,000’ and the word ‘FORINT’ broken into two horizontal lines. At the bottom of the coin, to the left the mint mark ‘BP.’ is found. The reverse shows a railcar of the underground railway in wooden panelling as the central motif (Budapesti Földalatti Közúti Villamos Vasút Rt., BFKVV-féle - Budapest Underground Road Tram Inc., BFKVV model) in a side view. Above that, in two horizontal lines the lettering ‘MILLENNIUMI FÖLDALATTI’ (Millenium underground) and the ‘VASÚT’ (railway) is shown. Below that are placed the year ‘1896’ on the left referring to the time the Kisföldalatti was launched and the mint year ‘2021’ on the right. The master mark of the coin designer applied artist Balázs Bitó is seen as copper letters screwed to the side of the car. On the edge of the collector coin, a representation of the Zsolnay tile pattern is shown surrounding the names of the stops.