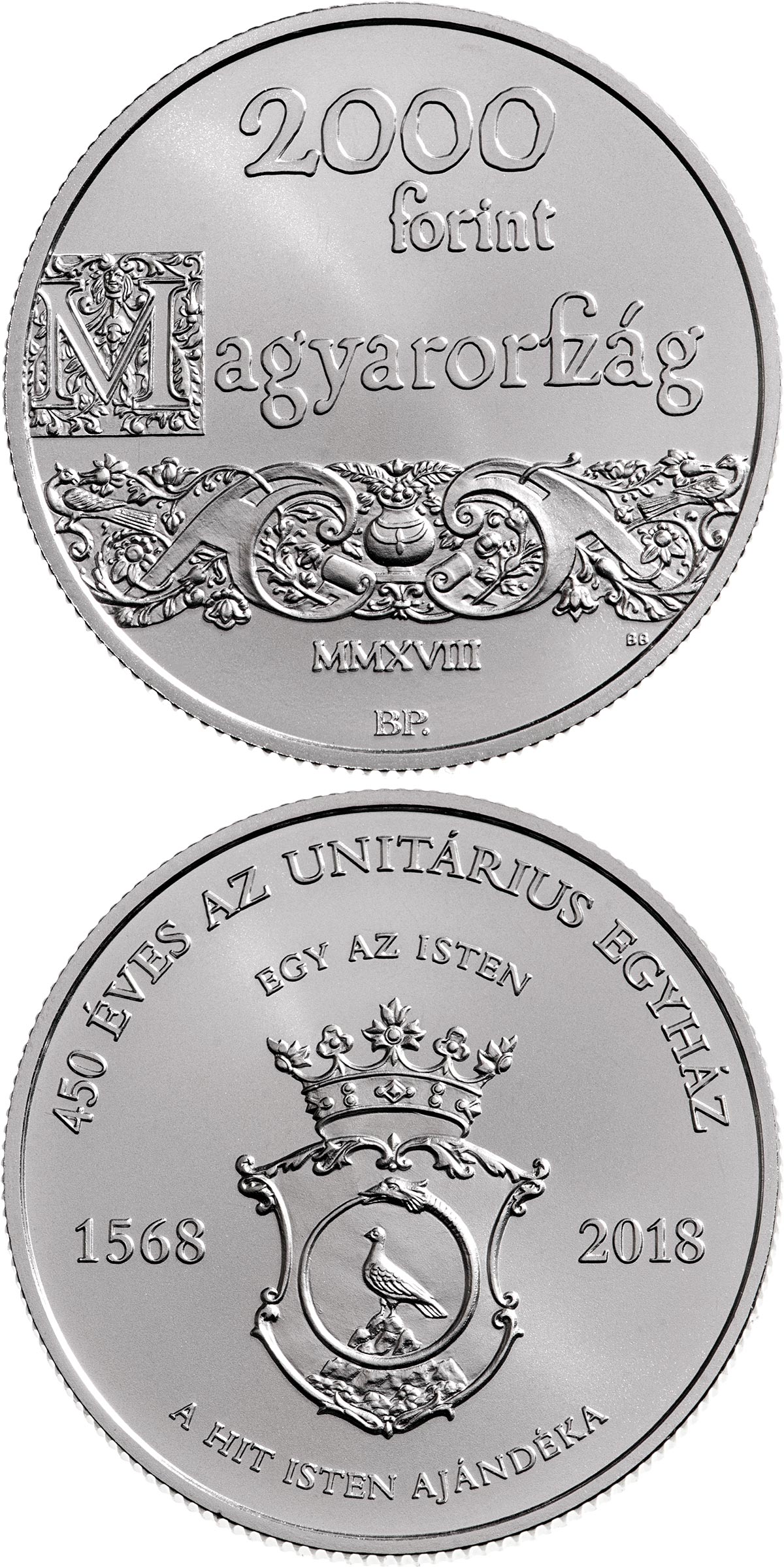 In 2018 the Hungarian Unitarian Church is celebrating its 450th anniversary. Its establishment was promoted by the Act on Religious Freedom created at the Diet of Torda in 1568. Due to this legislative act the different versions of the Reformation had a chance to freely transform into a separate church in a peaceful manner facilitating the development of the four well-known religions (Catholic, Reformed, Evangelical and Unitarian) into a denominational system.

“The 450 Years of the Unitarian Church” collector coins are legal tender in Hungary, but they do not serve circulatory purposes. Primarily they are a means to commemorate, and pay tribute to, the legislation passed in Torda, which, for the first time in world history, laid the foundation of a fundamental value to modern democracy: the right to religious freedom. Among other things, it also institutionalised the only church founded in Hungary. The silver and the non-ferrous metal versions have the same design, the only difference being their denominations.

The clean composition of the obverse was inspired by the Bölöni psalterium compiled in the 18th century, a rare copy of the manuscript unitarian psalm book. The compulsory elements of the collector coin are featured in the font type used in the psalm book: the dominations 10,000 and 2,000 forint, the lettering Magyarország, whose initial is a replica of the one used in the psalm book, the mint year 2018 in Roman numerals and the ‘BP.’ mint mark. The decorative stripe on the collector coin was inspired by the decorative motif displayed on the header of the psalterium. Below the decorative motif the master mark of the goldsmith Balázs Bitó is shown, who designed the collector coin.

The Unitarian Church uses the Bible as a source and it is also reflected on the reverse. As the central motif on the reverse the coat-of-arms of the Hungarian Unitarian Church is shown. It bears the representation of a scene where a dove is standing on a rock surrounded by a snake biting its own tail. The scene makes a reference to the Biblical quotation: ‘Therefore be as shrewd as snakes and as innocent as doves.’ (Matthew 10:16)

Above the coat-of-arms, the lettering EGY AZ ISTEN (God is one) is shown in a legend, which can typically be read on Unitarian churches and steeples. Below that, the Biblical quotation ‘A HIT ISTEN AJÁNDÉKA’ (Faith is the gift of God) (Ephesians 2:8) is featured. This quote also appears in the Act on Religion ratified by the Diet of Torda in 1568. In the upper legend the lettering 450 ÉVES AZ UNITÁRIUS EGYHÁZ (The 450 years of the Unitarian Church) is highlighted, which makes reference to the occasion the collector coin is issued on. To the left of the central motif 1568 is shown, the year the Diet of Torda was held, where religious freedom was enacted, and the Unitarian was founded. To the right the mint year 2018 is featured.