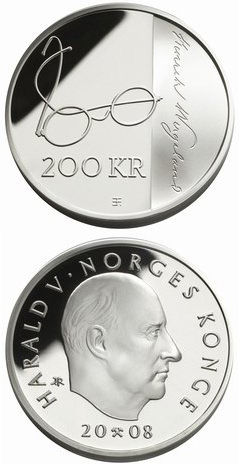 This commemorative silver coin was issued to mark the 200th anniversary of Henrik Wergeland’s birth. The coin was part of nationwide celebrations in 2008, which were organised by the National Library, the National Archives and the Eidsvoll 1814 Foundation. The coin’s reverse (tails side) depicts Wergeland’s characteristic glasses and signature. A jury selected the winning design, which was created by Enzo Finger.