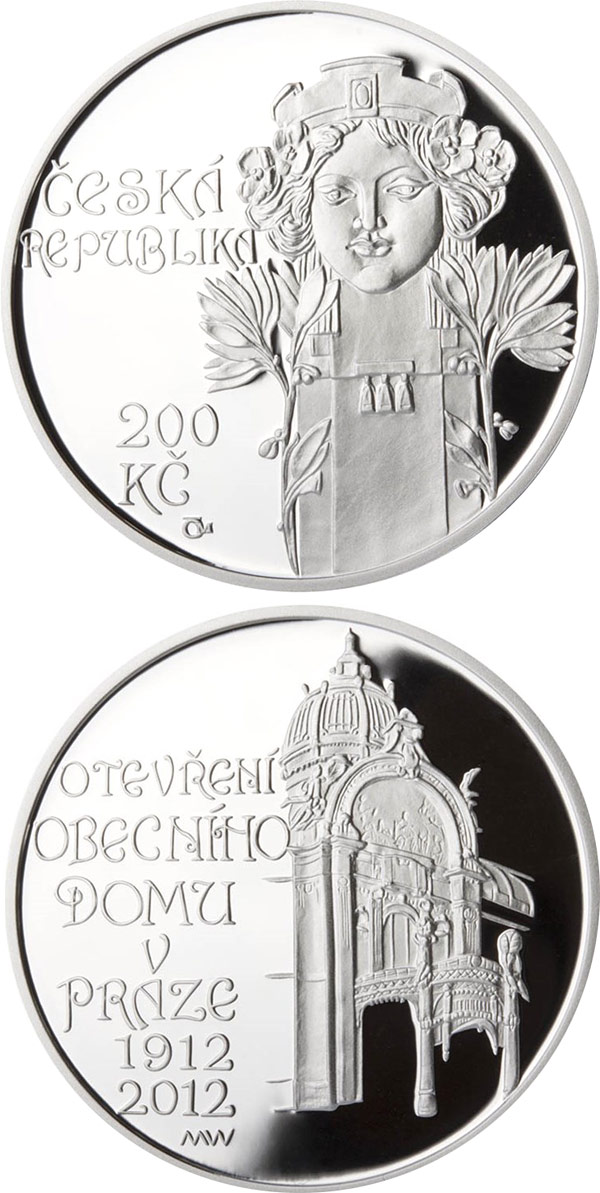 On 7 November 2012 the Czech National Bank is putting into circulation a CZK 200 commemorative silver coin to mark the 100th anniversary of the opening of one of the most important Art Nouveau buildings in the Czech Republic, the Municipal House in Prague. The coin is minted from an alloy containing 925 parts silver and 75 parts copper and is issued in two versions, normal quality and proof quality, which differ in surface treatment and edge marking. Proof-quality coins have a highly polished field, a matt relief and a plain edge with the inscription “ČESKÁ NÁRODNÍ BANKA * Ag 0.925 * 13 g *”. Normal quality coins have milled edges. The coin is 31 mm in diameter, weighs 13 g and is 2.2 mm thick. As with any other coins, deviations in diameter of 0.1 mm and thickness of 0.15 mm are allowed. Upward deviations in weight of 0.26 g and silver content of 1% are permitted. The obverse side of the coin features an image of “Fidelity” from the decorations of the Mayor’s Hall of the Municipal House in Prague. The name of the state in Czech “ČESKÁ REPUBLIKA” in stylised Art Nouveau writing is located to the left of the image of “Fidelity” and the denomination and abbreviated monetary unit “200 Kč” are written below it. The coin was minted by the Czech Mint. Its mark in the form of the letters “Č” and “M” is located below the denomination. The reverse side of the coin features the facade of the Municipal House in Prague. The text “OTEVŘENÍ OBECNÍHO DOMU V PRAZE” in stylised Art Nouveau writing and the years “1912” and “2012” are located to the left of the facade. The coin was designed by Majka Wichnerová, whose initials “MW” are located at the bottom left-hand edge of the coin. Each coin comes with a gold-coloured catalogue card containing a description and the relief of the coin.