For the first time in its history, Swissmint is dedicating a Swiss commemorative coin to a living person: Roger Federer. As well as being probably Switzerland's most successful individual sportsman, he is also the perfect ambassador for Switzerland. That is reason enough for Swissmint to honour Roger Federer with a 20-franc silver coin. The date of issue is 23 January 2020, and the pre-sale (uncirculated quality) begins on 2 December 2019. This will be followed by the release of a "Roger Federer" gold coin in May 2020. There is no other Swiss person in the world as well known as Roger Federer. One could almost lose count of his tennis records – he spent 237 consecutive weeks as world No. 1, holds the most grand slam men's singles titles (20), and has won 103 singles titles in total so far. These records and his versatile playing style make him probably the greatest tennis player of all time. But Roger Federer is just as active off the court. In 2003, he set up a foundation to support financial aid projects for children. Moreover, in 2006 he was named as the first Swiss UNICEF Goodwill Ambassador. His sporting achievements, his charitable commitments, his easy-going nature and his accessibility to his fans have prompted Swissmint to dedicate this 20-franc silver coin to him – the first time it has done so with a living person. Moreover, in May 2020 it will be issuing a 50-franc "Roger Federer" gold coin featuring a different design. 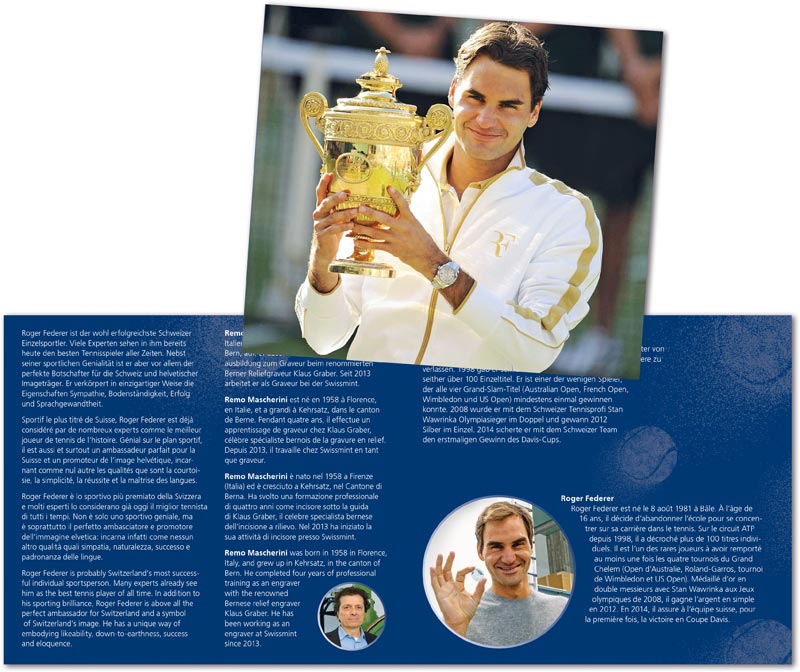