20 francs - Illusion – The Bridge of Life

One of Sandro Del-Prete’s well-known works, "The Bridge of Life", adorns the 20-franc silver coin issued by Swissmint on 29 April 2021. In the narrower sense of the word, an illusion is a trick of the senses, i.e. a false perception of reality. Optical illusions can be created using various elements: movement, brightness and contrast, colours, geometrical and angular illusions or even three-dimensionality. Various painters and artists use these optical techniques (trompe l'oeil) to create unusual and surprising effects for the observer in a bid to evoke amazement and astonishment. As a matter of fact, this form of art has not yet been given a definitive name. The Swiss artist Sandro Del-Prete is an important representative of drawings and objects involving optical illusions, which he calls "illusorism". A typical example of this is his oil painting "The Bridge of Life", which was used as the model for the silver coin. Writing about this painting, he said, among other things: "The people are perpetually moving forward, towards the observer, and are never seen from behind. They are always heading towards the end of life. As no one gets younger as time passes, no one can be seen from behind either. This contains and illustrates one of the secrets of the universe: Where is the past? Where is the present? Where is the future?" 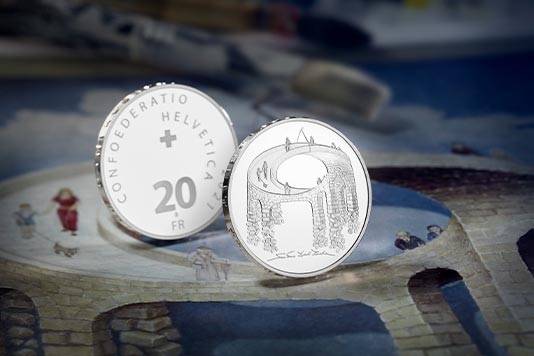