With the new 20-franc silver coin "Friedrich Dürrenmatt", issued on 21 January 2021, Swissmint has honoured one of the most successful German-language writers, who would have celebrated his hundredth birthday this year. Playwright, story-teller, essayist and artist: Friedrich Dürrenmatt was born on 5 January 1921 in Konolfingen near Bern, the son of a protestant minister. In 1935, the family moved to Bern, where in 1941 Dürrenmatt began his studies in literature, philosophy and natural science. It was during this time that he produced his first literary texts, as well as ink drawings and paintings. In 1946, he abandoned his studies after deciding to become a writer. His first play, It is Written, premiered in 1947. Up to his death on 14 December 1990, Dürrenmatt lived in his house at Pertuis-du-Sault in the canton of Neuchâtel (now the Centre Dürrenmatt Neuchâtel), to which he had moved in 1952. Dürrenmatt was married twice and had three children from his first marriage. He is most famous for his plays The Visit and The Physicists, and the crime novels The Judge and his Hangman and The Pledge. His work has been translated into over 40 languages and has received numerous prizes, making him one of the most successful German-speaking writers of international renown. Dürrenmatt bequeathed his literary legacy to the Swiss Confederation. This led to the establishment of the Swiss Literary Archives in 1991. His paintings and drawings are curated by the Centre Dürrenmatt Neuchâtel, which opened in the year 2000. Source: Swiss Literary Archives
The new 20-franc silver coin designed by Swissmint's engraver Remo Mascherini, is available for purchase in the qualities 'uncirculated' and 'proof' in a presentation case at our online-shop or from selected coin dealers and banks. 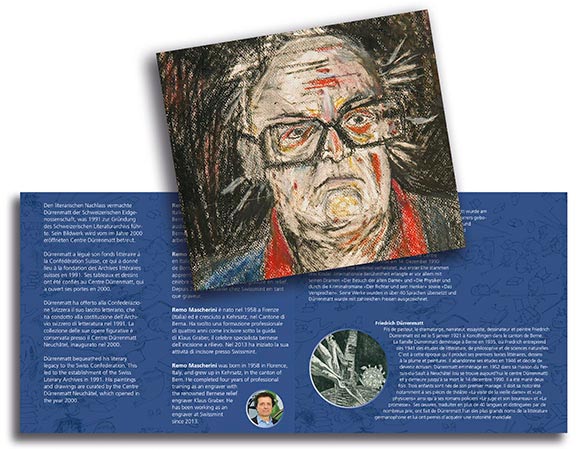