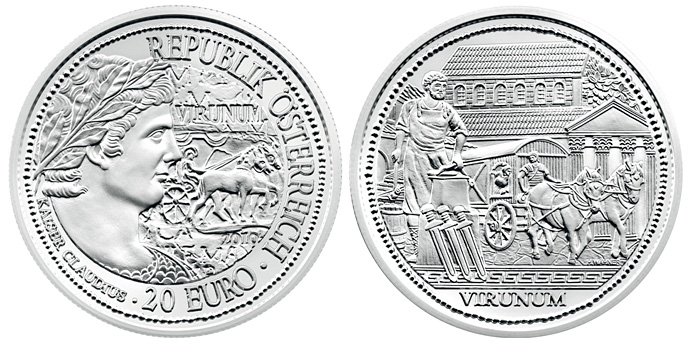 Roman history took place partly in today’s Austria. This is what the new series "Rome on the Danube" refers to. The first issue is dedicated to the capital of the Roman province Noricum, Virunum, which is located at the Zollfeld in Carinthia.

The € 20 silver coin will be issued on Wednesday, 5th May. In addition to Virunum there will be issued Vindobona later this year, Carnuntum and Lauriacum (Enns) next year and in 2012 Aguntum (near Lienz) and Brigantium (Bregenz).

The obverse of the coin shows the profile of Emperor Claudius. During his reign Virunum, the capital of the province Noricum, was founded. Next to it are fragments of Roman inscriptions. A tomb relief from Virunum can be seen as well showing a Roman carriage with horses.

The reverse depicts a Roman smith at work. In front of the anvil are three swords. Noric steel was much sought after in the whole Roman Empire and prized for its good quality. Behind the smith a Roman carriage goes by carried by heavy Noric horses, another characteristic of the Roman province Noricum. In the background can be seen a basilica and a temple.