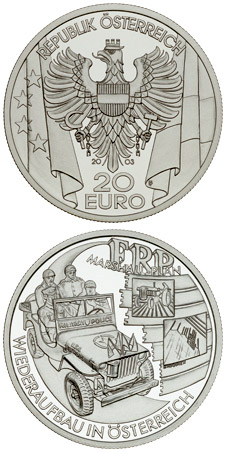 This side of the coin displays the coat-of-arms of the Second Republic. The broken chains on the eagle’s claws symbolise the re-birth of an independent and sovereign state freed from Nazi bondage. To the right is draped the red-white-red flag of Austria. To the left is the flag of the European Union, representing Austria’s participation in the new organisation of European states. This side of the coin shows both the "Four in a Jeep" and the design of a E.R.P. (European Recovery Program) poster. The German inscription "Wiederaufbau in Österreich" translates as "Reconstruction in Austria".