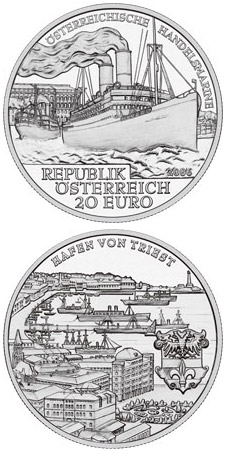 The principal port for the Austrian merchant navy in the Adriatic was the harbour city of Trieste. It was from here that most of the freight and passenger ships under the red-white-red flag sailed out into the world at large. Trieste was home to many shipping companies and ship building yards, including the Austrian Lloyd (known today as Lloyd Triestino) and the Austro-Americana (today the Cosulich Line). The obverse shows the largest and fastest of the Austro-Americana liners, the Kaiser Franz Joseph I, as she sails out of Trieste. In the background we see the Lloyd ship Brünn arriving in port and the impressive maritime buildings lining the foreshore. The reverse side gives a bird's eye view of the port of Trieste, which had belonged to Austria since 1382. In the foreground on the right is the old coat-of-arms of the city in the time of the Austro-Hungarian Empire. The view of the harbour is taken from the square in front of the railway station along the Riva (the street along the harbour front) past the moles or piers running out into the harbour down to the Laterna, the lighthouse at the end of the Molo S. Teresa. The harbour itself is full of steamships and sailing ships at anchor or tied to the docks.