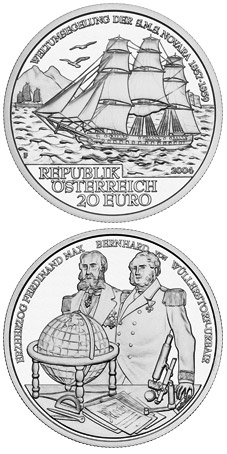 The obverse shows the frigate S.M.S. Novara under full sail in Chinese waters during her circumnavigation of the globe in 1857-1859. The Novara was the first Austrian (and first German-speaking) ship to circumnavigate the world. It was also the last ship of the line to do so under sail. In the background one can see the Chinese coast and a Chinese junk under sail. Seagulls, always a sign of the proximity of land, circle the ship. From the stern flutters the red-white-red flag of the imperial navy. On the reverse is a double portrait of Archduke Ferdinand Max, the naval commander-in-chief and the initiator of the voyage, and of Commodore Bernhard von Wüllerstorf-Urbair, who commanded the Novara on her voyage of circumnavigation. Before them on the table is a large ship’s globe and instruments of navigation, along with a microscope indicating the scientific nature of the mission.